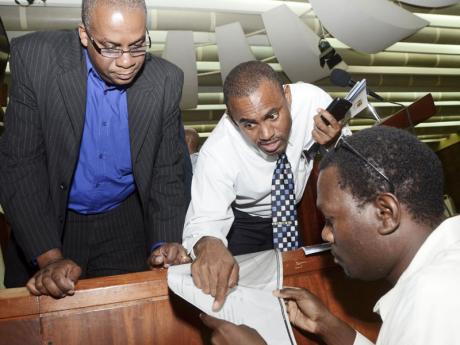 Courtney Lodge (centre), CEO of GSB Cooperative Credit Union, and Michael Roofe (left), president of the GSB, explain something in a report to Richard Mais, a shareholder, at a meeting to formalise the merger of GSB and Churches credit unions, which was held at the Jamaica Conference Centre, Kingston, on Wednesday. The new name of the merged entity is First Heritage Co-operative Credit Union Limited.- Rudolph Brown/Photographer

It is a truism that Jamaica is a country of abundant natural beauty. Regrettably, the same glowing tribute cannot be offered for our built environment.

I was encouraged several months ago when there was a report of new plans from the Urban Development Corporation (UDC) to build or rehabilitate housing stock in downtown Kingston. I was heartened when I heard the passionate and stirring appeal by the prime minister in her Budget presentation, rallying us to the cause of providing decent housing opportunities for all, including the poor.

And then I reflected on our reality and had to admit that our record of managing our built environment is not a good one.

When one looks at the majority of the housing schemes soon after they are handed over, it is clear that their original aesthetic appeal has a very short half-life. While some of the schemes look well laid out on paper, complete with sidewalks, play areas and green spaces, they soon get taken over by road mechanic shops and vending merchants, not to mention the illegal and unsightly piling up of construction material on the roadways for the benefit of private home-improvement projects.

Particularly distressing is the harum-scarum manner in which start-up housing solutions regress from the attractive draughtsman's impressions to the unsafe and unsightly monstrosities that ruin the character of the schemes, in effect ruining the built environment.

The fact is that unlike some other jurisdictions that we admire, it appears that our state authorities, and even the homeowners' associations and strata corporations, are impotent to ensure the enforcement of building covenants that deal with safety standards and agreements to foster harmonious communal living.

While we cannot and should not dictate how people express their individuality through their home designs and the built environment, generally speaking, as a society, there are norms that once agreed, need to be enforced and mechanisms found to encourage enlightened compliance. One way to achieve this goal is to have robust and sensible laws and regulations, and effective and useful building services provided by the parish councils and other approving agencies.

Key to this effort is the input of professionals such as architects who are trained designers who work on buildings, as well as the places in and around them, by combining creativity with a wide range of technical knowledge to provide integrated solutions for the natural and built environment. There should be greater use of Jamaican architects as poor people also deserve a good built environment.

Architects can add value that draughtsmen or untrained contractors may not be able to provide. It would be good if our architects would find ways to better price their services in order to benefit the poor. For any scheme, architects can work with the National Housing Trust (NHT) or any developer to prepare a variety of designs that are safe to carry additional loads because of expansion, and that will maintain congruent building lines and aesthetics.

How great it would be to see schemes all over the country blossoming with a variety of expanded dwellings that are architecturally pleasing and which effectively incorporate appropriate use of land, quantities, natural lighting and materials, etc. Can you imagine the personal satisfaction of a poor family occupying a two-bedroom unit that is also neat and attractively situated in a scheme just like how the more affluent among us feel satisfied in their well-designed gated communities?

The NHT can play a lead role in improving our built environment, given that they have been tasked by the prime minister to undertake this public initiative. This is an area in which the State can use its influence and control in a positive way, even as it is recognised that citizens are entitled to self-expression in how they chose to impact on the built environment.

Email feedback to columns@gleanerjm.com and christopherjmpryce@yahoo.com.