Inmates feed themselves and the nation 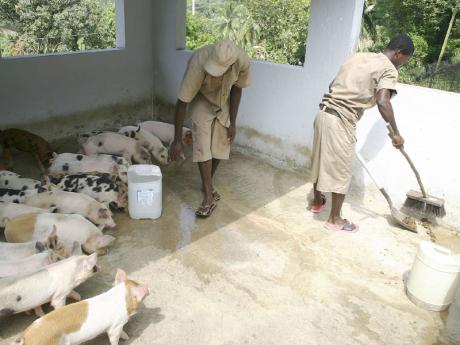 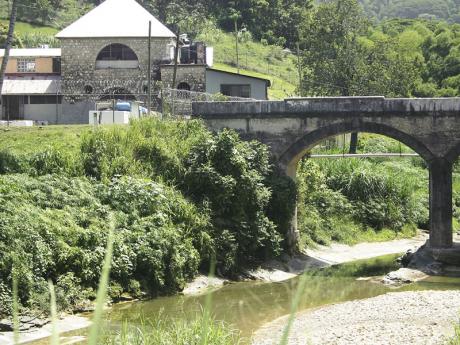 Water from two rivers which run alongside the Richmond Farm Adult Correctional Centre is pumped and piped to the property, where it is used to irrigate crops. 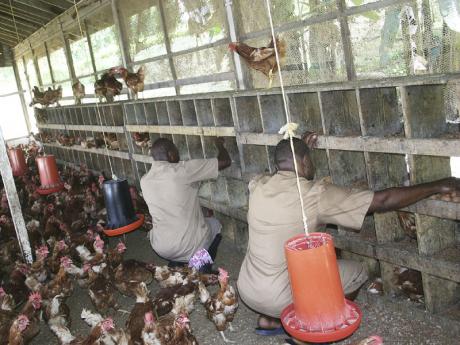 Two inmates collect eggs from one of the poultry houses. 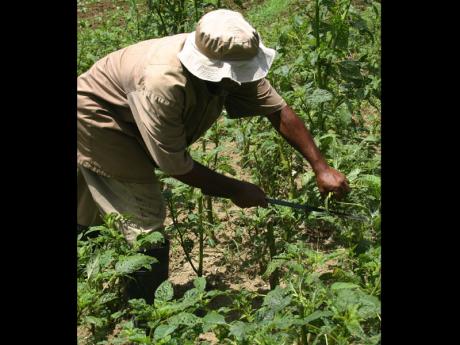 This inmate cuts back some old callaloo stalks, preparatory to clearing the land for replanting. 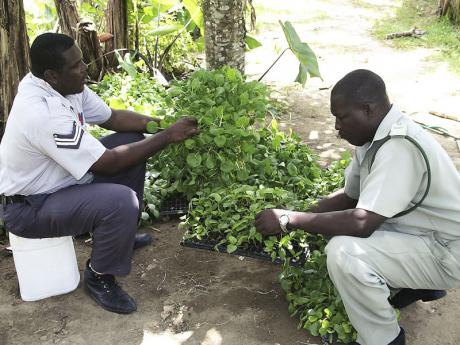 RICHMOND, St Mary:AGRICULTURE MINISTER Roger Clarke recently noted that the staggering food import bill for 2011 of US$930 million (J$80 billion) was "unsustainable", and declared that Government would redouble its effort to get Jamaicans to eat more locally produced foods.

"Any institution that comes under government control - be it hospital, prison, infirmary - we can't afford to be importing food to feed them," he told Tuesday's inaugural graduation of the Farm Field School at the Alhambra Inn, St Andrew.

However, the Department of Correctional Services through COSPROD (Correctional Services Production Company) has for more than 15 years been doing its part to not only feed the inmates in its care but, in the process, also impart a skill as part of the rehabilitation process.

The crops and other produce at all three locations are sold at low costs to the Department of Correctional Services and the surplus sold to staff members and outside markets. Projects include animal husbandry (pig, sheep), crop production (vegetable, orchard, tree crop), poultry rearing (layer and broiler meat rearing), block making, welding, and woodwork manufacturing.

Richmond Farm has the largest acreage and has been leading the way in vegetable production, with eggs and pork also doing well.

On a recent visit by The Gleaner to the Richmond Farm, it was made clear that the COSPROD operation is, in fact, a proper business venture. For the month of April, the efforts of inmates, supervised by correctional officers, yielded an impressive:

Add to that dried coconuts, jelly coconuts and eight boxes of wet cocoa supplied to the Richmond Fermentary.

The success of COSPROD has made the Department of Correctional Services self-sufficient in vegetable and eggs, which is quite an accomplishment if taken against the background of the weekly demand at Tower Street with the largest population of more than 8,000 inmates. Richmond provides 1,000 pounds of cabbage, 295 dozen eggs, 1,100 pounds of callaloo, 550 pounds of pak choi, with Tamarind Farm contributing 840 pounds of chicken.

Impressive as these figures are, Rupert Taylor, COSPROD project manager at Richmond, believes that with more assistance, such as a tractor to plough the fields, they could lift production figures much higher. While water is pumped from a nearby river and piped to the fields, the establishment of a proper irrigation system would significantly enhance their efforts. However, for now, the inmates at these correctional centres are helping to feed themselves and the nation.