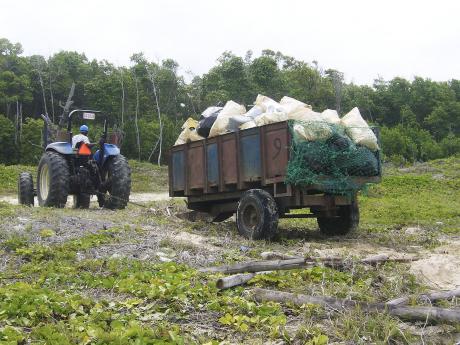 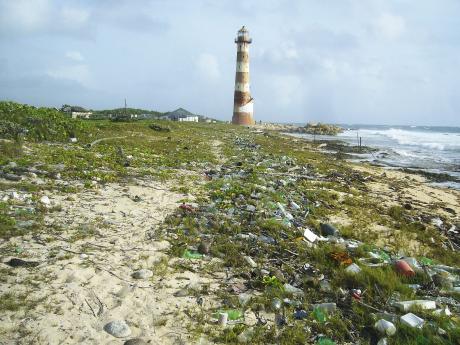 The pristine area around the lighthouse at Morant Point, St Thomas, is in danger of being spoilt by the deposit. 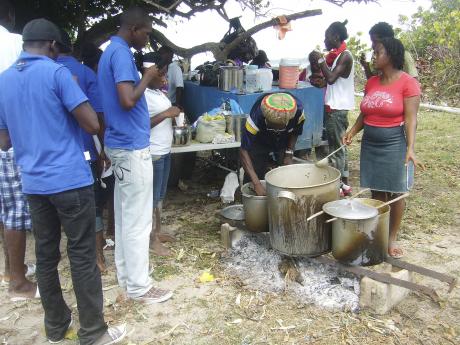 After hours of removing tons of debris from Mammee Bay Beach, St Thomas, on Saturday, June 2, it was time out for lunch.-Photos by Paul H. Williams
1
2
3

MORANT POINT, St Thomas:PRISTINE IS the adjective for Mammee Bay Beach, located on Jamaica's most easterly coast, near the lighthouse at Morant Point, St Thomas. Cream-coloured, powdery, seaweed-strewn sands glisten under the sun, and the water is clear and pure. It's arguably the most beautiful, unspoilt beach on the island, except everywhere, there is the impact of the 'plastic revolution'.

On the edge of the beach, there are hundreds of plastic bottles and other man-made refuse spoiling the ambience. The unsightly mess didn't go unnoticed, though, by a group from Source Farm Eco-village in John's Town, St Thomas, that went for a day out at the beach on Easter Sunday.

Even when they were in the water, the debris was being washed ashore. Being the sort of environmentally friendly people they are, the idea of a beach clean-up manifested itself, starting out as "a joke", but soon becoming a serious consideration, and they were not going to wait for World Beach Clean-up Day in September.

Spearheaded by Vera Sauter, a German social worker and a work-exchange guest at Source Farm, a clean-up was planned two weeks afterwards, for Saturday, June 2.

But there was a problem: no money to fund the project. Several persons and organisations were contacted, but no significant financial assistance was given to Source Farm, so the members had to pinch from their own meagre funds. Three supermarkets in St Thomas chipped in by donating miscellaneous items, and Catherine's Peak provided many boxes of bottled water.

On Saturday, June 2, with The Gleaner in the thick of things, the journey to the beach started at 6 a.m., and what a day it was! It seemed like an arduous task, but luckily, no refuse was in the water itself, but on the outskirts of the beach, and within the Great Morass.

The Source Farm team, and some young men from Duckenfield Sugar Estate arrived first. They were soon joined by National Youth Service (NYS) members from St Thomas and some young people from National Housing Trust (NHT) schemes in the parish. Also participating was Ivan Solomon from the St Thomas Environmental Protection Association.

Duckenfield Sugar Estate, through which the road leading to the beach runs, was the most supportive, and the success of the day could be placed squarely upon their shoulders, as well as those of the Source Farm. They provided an excavator for the temporary toilet, a truck-drawn metal water tank, several 'sugar bags', and lorries to transport the garbage collected. At the end of the day, many bags of garbage were removed from the beach and taken to a spot. The National Solid Waste Management Authority will be contacted to remove the garbage.

Unfortunately, only the beach on one basin was cleaned. The second basin, the Great Morass and the area south of the lighthouse were not cleaned due to a lack of time and resources. And after several hours of cleaning under the bright sun, it was time for the peas and corn soups and boiled and roasted corn, eaten with dried coconut.

Nicola Shirley-Phillips, one of the operators of Source Farm, in reflecting on the day's events, said, "It was a daunting task", but she "was very thankful that it came off".

"It was challenging, but I had a good time. It made me reflect on the amount of plastic we use," she said.

Vera Sauter's reaction was that she was satisfied as it was a "great success for a first-time effort", and the beach "looks definitely better". She said it was great to mobilise the community to do voluntary work and that the effort was about empowering the people.