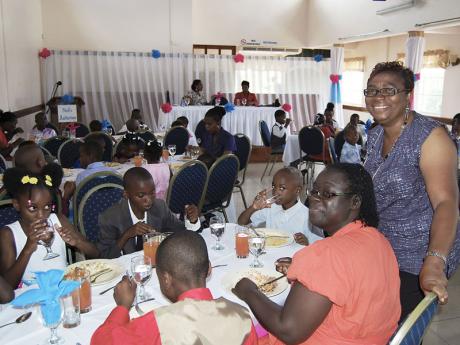 MANDEVILLE, Manchester:EBENEZER PRIMARY School, although located in a remote section of south Manchester, through its hard-working staff is sticking to the task of shaping its students into model citizens.

With this mission in mind, the staff recently held a luncheon in recognition of Child's Month at Neil's Auto Auditorium in Mandeville where the students, all elegantly dressed, were treated to a truly memorable event.

"We have been having this luncheon for three years now to coincide with Child's Month in May," explained principal, Patricia Bernard. "It is to take them from their personal setting into a formal setting where they sit, listen, and practise the social graces. It's really a treat for them."

Bernard added: "The children are from very poor communities with little opportunities. The road is so bad to go there (school) that many persons don't want to venture there. Sad to say, but some of these children were coming to Mandeville for the first time and will never get an opportunity like this again in their lifetime."

The entire school, from grades one to six, numbering 60 students, was in attendance. The event was supported by Andrews Memorial United Church Women's Fellowship and the Ebenezer United family.

It was a family affair as the students were accompanied by other members of the school's community: teachers Rosemarie Dawkins, Eneka Nesbeth, and Nicola Allen; school cook Nicole Roberts; and janitor, Tamara Swaby. Also in attendance were the parent- teacher association president, Shellyann Williams; volunteer teacher Peta-Gaye Blake; and retired educator, Sandra Forbes, who has been mentoring some of the students.

Charmaine Gooden Monteith, executive member of the Jamaica Teachers' Association and former education officer, was guest speaker at the event. Monteith had a good interactive session with the students. She explained how important it was for kids to be given adequate exposure and to be taught the proper social graces, which, she said, would better equip them for life experiences in the future.

While eating their sumptuous meal, the students were blessed by the beautiful voice of Sue-Ann Smellie, another friend of the school, whose selections included The Greatest Love Of All, made popular by the late Whitney Houston.

"Our aim is to train students to be self-sufficient and lift their standard to a higher level. It is a small school where we are working against the odds. They might not be excellent academically, but at Ebenezer we ensure that we play a part in shaping worthwhile citizens of the country", noted Bernard.