From 'Granny Boy' to president 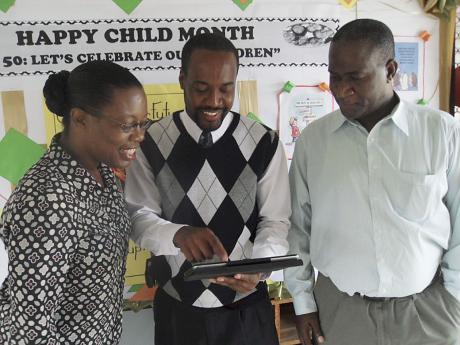 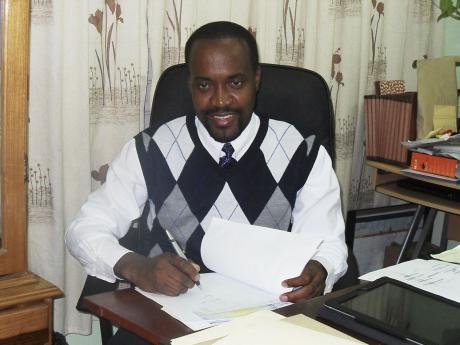 Clayton Hall in his office. 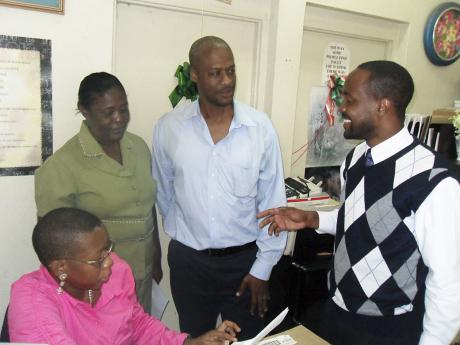 "I liked the names as I was always proud to be associated with her," said Hall about his grandaunt, Myrtle Grant, late retired principal of Fairfield All-Age School, who was his guardian since he was 11 months old. Though he was raised by his grandaunt, he said he shared a close relationship with his mother.

"I remember both of them in her little car. You would always see both of them together - morning and evening," recalled Yvonne Franklyn, principal, Buff Bay Primary, of Hall and Grant. He was transferred from Fairfield All-Age School to Buff Bay Primary School after Grant retired, and Franklyn was his grade four teacher.

"He was a brilliant student!" Franklyn related with a sense of pride.

"He loved to read anything related to science, and when he came to school in the mornings, he would always come with a bag of questions," she chuckled. "Sometimes I was scared because sometimes I could not answer the questions, and I had to promise him that I would look up the answers," she confessed.

Then an aspiring lawyer, the straight 'A' student sat the Common Entrance Examination while he was in Franklyn's class at age 10, earning a place at Titchfield High School. Father Sedley Gooden, senior teacher at Titchfield, taught him religious education in grades 10 and 11.

After completing sixth form, Hall was accepted at the University of the West Indies (UWI), however, lack of financial resources delayed his plans to pursue undergraduate studies. So he worked in Kingston for the summer and returned to Portland, where he completed a two-year stint as a pre-trained teacher at Avocat Primary and Junior High School.

"Even at that time, I still harboured nostalgic ideas of being a lawyer, but children grow on you, and a teacher at heart, I got addicted and have not looked back since," an unassuming Hall said beaming.

Prior to obtaining a first-class honours degree in history at the UWI, Hall earned a teaching diploma at Mico Teachers' College.

"I went to UWI for personal development, but my grandaunt's dream was to see me in an office, so I went to UWI, partially fulfilling her dream. I started in 2002. She died in 2003, and when she died, I promised myself I would focus specifically on her desires," he recounted.

Upon leaving the UWI, he taught at Alpha Academy in Kingston for a year before his inextricable ties with his birth parish took him to Mount Hermon Primary and Junior High in 2005, where he served as principal for almost three years.

Then, in March 2008, he assumed the role of principal at Four Paths Primary and Junior High School in Clarendon. His sojourn at Spanish Town High School, which he describes as "the oasis of intelligence in the desert of ignorance", began in August 2010.

Hall's association with the JTA dates back to 1995. Over time, he has served in various capacities at different levels - as president of the St George's District in Western Portland in 1996; president, May Pen District; chairman, public relations committee, under Michael Stewart's leadership from 2009-2010; and member of the Central Executive and General Council. He also served as campaign manager for immediate past president, Nadine Molloy-Young.

For Franklyn, Hall's achievement is not surprising.

"I always saw him as a leader. He is very knowledgeable and he understands what he is doing. Although I taught him, when I was acting as principal, he gave me advice and told me things I did not know," said Franklyn, who has been in the profession since 1971.

Hall's calm demeanour, administrative skills, and dynamism have won him the admiration of both colleagues and students.

"He is generally an easy-going, but hard-working person, very pleasant, not easily flustered. He has quite a good rapport with both staff and students," Leopold Porter, vice-principal, upper school, Spanish Town High, shared with The Gleaner.

Hall will be installed as president at the JTA's 48th annual conference, which will be held at the Sunset Jamaica Grande Resort and Spa in St Ann from August 20-22.

In fact, when he assumes the leadership of the JTA, Hall will hold the distinction of being the youngest president and the first principal from Spanish Town High to serve in the position. Cognisant of this milestone, he has expressed gratitude to his staff, school board, and the wider community for their support and assistance since becoming president-elect last year.

His vision is for an education system which facilitates total inclusiveness. Therefore, he is suggesting that special-education units be created within existing school to facilitate children with learning disabilities.

"We would basically need to retrofit a particular classroom in an existing school using the same administrative budget. So you wouldn't need to pay a new principal or new staff, just employ specialists to use that classroom. And it goes well with the theory of inclusion, where students who have learning disabilities, or even physical disabilities, are exposed to student interaction within their school environment," explained Hall.

At the same time, while an assertive Hall applauds efforts to focus on underachievers, he said equal attention should be placed on overachievers, or gifted students.

"I would want to see a programme of special ed geared towards this venture. When the term special ed is used, the majority of us think persons who have learning disabilities. We do not consider the other end of the spectrum," he noted.

The father of three has been integrally involved in community development and sporting activities. As a result, he served the Portland Cooperative Credit Union Supervisory Committee and the Portland Environmental Protection Agency. He was also manager, St George's football team, and charter vice-president, Optimist Club of West Portland.

Hall is married to Sofia, former principal, now education officer in the Core Curriculum Unit at the Canewood Centre in the Ministry of Education.

Improved conditions of service for teachers;

Do consultations at the district level with hierarchy.