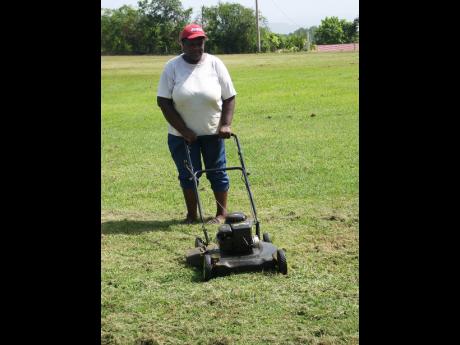 Herline Grizzle mowing the lawn in the park. 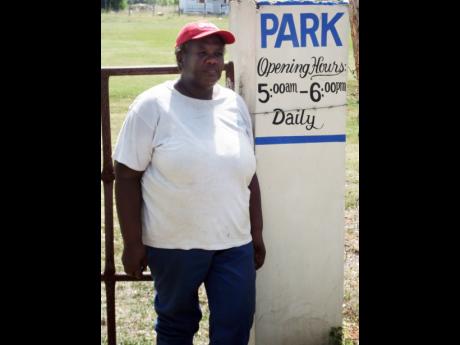 SANTA CRUZ, St Elizabeth:HERLINE GRIZZLE is in the process of transforming a neglected park and a roundabout in the Olive Park neighbourhood, located near Santa Cruz in St Elizabeth.

Grizzle is a nurse who has been in retirement for over a year. She has adopted the community's park with a view to transforming the area so everyone in the community can benefit. She said the park is approximately eight acres and was once engulfed in a lot of shrubby. Currently, it has a cleared area the size of a football pitch, some fruit trees along the fence, an underutilised netball court, and the structural outline of a bathroom and kitchen.

She said her vision for the park is to have proper fencing, fruit trees, a flower garden, swings for the younger children, a walking path, a car park, a multi-purpose shelter, and a swimming pool.

Grizzle said she first started to work in the park on Labour Day last year. The work has continued and has become more frequent since her retirement a year ago. Grizzle goes to the park almost every day to do work, which includes maintaining the grass with her lawn mower, picking up garbage or stones, and spraying.

To further beautify the community, she is also in the process of planting a hedge at the roundabout in the community. So far, she has done some planting and spraying and is looking forward to making an aesthetically pleasing addition to the main thoroughfare within the community.

Although she is supported by the citizens' association, most of the physical work is done by her with the assistance of her husband and an occasional volunteer.

Grizzle told The Gleaner that she does not have a problem with the arduous work as it helps her to maintain some form of physical fitness. However, what can be problematic is finding money to purchase gas for the lawn mower. She said at times, the gas bill for the lawn mower can be as much as $5,000 per month.

She said some residents make random contributions for gas, and the citizens' association is trying to undertake an initiative to encourage residents to contribute a small sum every month to offset the expenses associated with maintaining the lawn mower.

Earl Lodge, a resident, told The Gleaner that Grizzle is doing an outstanding job in the community.

"Every morning at 5:30, she pass with her lawn mower to cut the field. You can see her alone cutting the field and picking up rubbish or asking for more support for the park."

Another resident and executive member of the citizens' association, Sister Agnes Mwongela, who was seen sitting on one of the few benches at the park, said for her, it is a peaceful and relaxing. Mwongela said it was also a place where other residents could walk and go to relax.

Notwithstanding the challenges, Grizzle told The Gleaner that she is motivated by the love of people, and wants to see her surroundings beautiful, especially since that is where she intends to live for the remaining years of her life. She is hoping that her work will be a legacy which can be passed on.