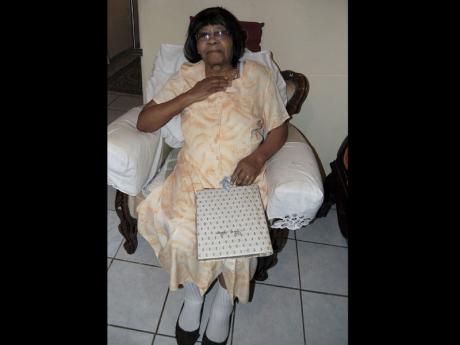 MANDEVILLE, Manchester:NINETY-NINE-YEAR-OLD IVY Osborne is a remarkable woman, who, at her age, still enjoys having a sober conversation on the telephone, reads her Bible, enjoys watching her favourite TV programmes Judge Judy and Dr Phil and also enjoys shopping in the town.

Osborne, affectionately called 'Aunt Ivy', or 'Grandma', was born on March 8, 1913, in Montego Bay, St James. In her early years, she worked as a matron in one of the first hotels in Montego Bay - Casa Montego - during a period when the western town was rapidly developing as a tourist destination.

She migrated to England in the 1960s and continued to work in the hospitality arena in various capacities. In recalling those early days in England, Aunt Ivy said, "Everywhere you go there were signs - no blacks allowed or no coloured," she said with very sharpe eyes.

Aunt Ivy spent 40 years in England, and then returned to live in Mandeville six years ago when her daughter, Deloris Edwards, former secretarial dean of studies at the Mandeville Bible College, got ill.

Osborne described her daughter as one of the most beautiful women in the world. She passed away in 2007.

Aunt Ivy speaks fondly of her grandchildren and six great-grandchildren, two of whom came from her adopted daughter, Pat Kirkland.

A close friend of the family, Alando White, speaking about Aunt Ivy, who he calls 'The Queen', said: "She is a very active person for her age. She loves to attend church at the Mandeville Bible Chapel. She also enjoys reciting poems and even has three recorded songs that she wrote."

Her caregiver, Lola Reid, revealed that Aunt Ivy loves to be looking her best at all times. "She loves to dress up and look pretty she is very conscious about her appearance," Reid said with a smile.

Aunt Ivy is also an avid storyteller and didn't hesitate to tell this writer a very interesting story, as well as pose a barrage of questions as if she was the interviewer.

"My grandmother is a very friendly, jovial person. She is kind hearted and loves young people around her," Dr Edwards disclosed. "She keeps up to date with the news, loves her cricket, and supports Liverpool in the English Premier League. She is soft-hearted, but strict at the same time."

"She is always telling stories. Sometimes she says things which you might take serious, but she is just doing it in jest," Geddes said.

Aunt Ivy disclosed that she had a very big 99th birthday party and said that if she makes it to the 100-year-old mark, she will be having an even bigger party then.

She is also looking forward to getting her 100-year-old birthday greetings from the Queen of England when it comes, which is customary for centurions who are citizens of Great Britain.

As to the Queen, Aunt Ivy commented on how good Her Majesty Queen Elizabeth 11 looked at her recent Diamond Jubilee celebrations, which she watched on her flat-screen TV.