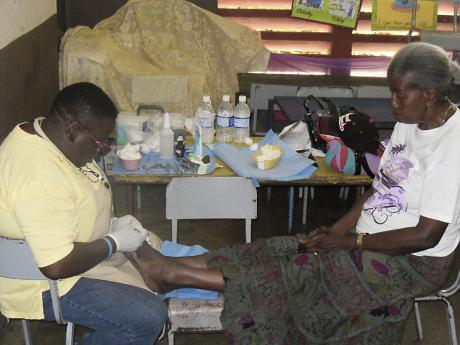 BOG WALK, St Catherine:MAINTAINING GOOD foot care is essential for diabetics. But Gloria Williams, who was diagnosed with the disease six years ago, said she had never taken the time to learn how to care for her feet.

However, she decided to do so, at the inaugural staging of Bethel Baptist Church's educational health fair held at Bethel Basic School on Church Road, Bog Walk, St Catherine, recently.

The former entrepreneur was anxious to share what she learnt from Joyce Amos, foot care assistant, at the Diabetes Association of Jamaica, who administered the service.

"The first thing I learnt is that a diabetic is not to wear Cutex (nail-polish). I never know that," she remarked seemingly surprised, "because it hides the fungus, if there is any, and it turn the nails different colours," she said almost like a teacher instructing her class.

Amos, who also works with the St Catherine Health Department, said she observed a common trend in most of the patients she examined at the fair.

"Most of the nails are discoloured and ingrown and not trimmed properly," she said. "They need proper footwear, because this is caused from them wearing improper footwear. They need to pay close attention to the way in which they trim their nails. Diabetics should examine their feet every morning and every night and learn how to recognise the early signs and symptoms of diabetic foot problems," she explained.

Winnifred Smith, in her 20s, is not a diabetic, but like several others, she took advantage of the services that were offered.

"I did HIV, blood pressure, and blood sugar tests for free. I am very glad I was able to get these tests done because it is not easy to find money to do these at times," she told The Gleaner, noting that she was grateful to the church for putting on the event as part of its outreach programme.

Yvonne Morrison, the church's health care coordinator and a nurse at the Linstead Health Centre said her observation which revealed that many persons did not know enough about chronic diseases stimulated the decision to host the event.

"It's an educational health fair because I noticed people have been accessing care from the health centres and still, they do not know enough about chronic diseases or nutrition, as it relates to their condition. So I thought it would be good for us to provide the opportunity for them to come and have one-to-one and do presentations where they can be more informed," she shared with The Gleaner.

Additionally, she noted that blood pressure and blood sugar checks revealed that several persons were unaware of their status.

"Out of this, we have noticed that a lot of people have been walking around with high blood pressure and don't know exactly what is happening to them," she explained.