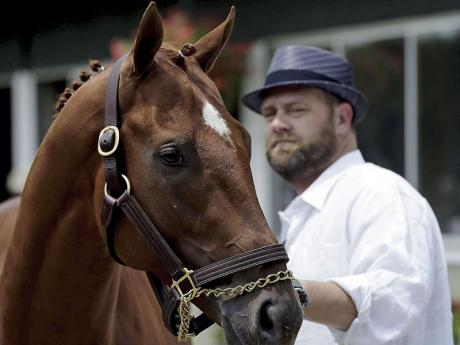 Kentucky Derby and Preakness winner I'II HAVE ANOTHER stands with trainer Doug O'Neill during a news conference at Belmont Park in Elmont, New York, yesterday. I'll HAVE ANOTHER'S bid for a Triple Crown ended with the shocking news that the colt was out of the Belmont Stakes due to a swollen left front tendon. The Belmont Stakes horse race is on today at Belmont Park.-AP 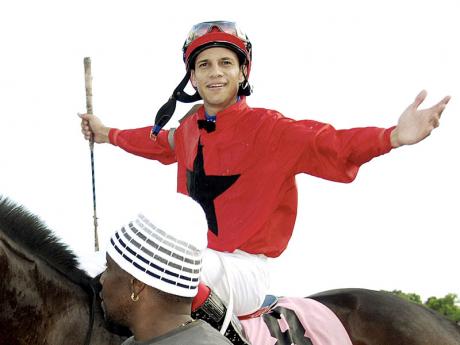 Champion jockey Dick Cardenas is excited about the prospect of winning his third consecutive Derby at Caymanas Park, when he rides the highly fancied UNCLE DONNY for trainer Anthony 'Baba' Nunes in the $9-million classic over 2400 metres today.

The quiet Panamanian will seek to emulate leading all-time jockey, Winston 'Fanna' Griffiths, as the only jockeys to have achieved the hat-trick in over 50 years of racing at Caymanas Park. Griffiths rode three consecutive winners from 1988 to 1990, and again from 2002 to 2004.

Over the past two years, Cardenas, who started riding in Jamaica in October 2008, has stamped himself as one of the top jockeys at Caymanas Park, culminating with his first jockeys' championship in 2011, having ridden 103 winners.

During that period, he won the Triple Crown (2000 Guineas, Derby, St Leger) aboard Horse of the Year MARK MY WORD for trainer Richard Azan in 2010, topping a marvellous season with an emphatic victory aboard MARK MY WORD in the rich and prestigious Red Stripe Superstakes.

Last year, he was not aboard MARK MY WORD when the classy colt repeated in the Superstakes, but for good measure, won his second Derby aboard the 32-1 outsider TECHNOMOTO for Nunes in June, this by a wide margin in post-to-post fashion.

Cardenas, who turns 28 on July 6, has already tasted classic success this season aboard UNCLE DONNY in the 2000 Guineas, and although trailing runaway leader Dane Nelson by 12 in the championship race (55 to 43), remains optimistic that with the help of his top-flight agent, Dwayne 'Hux' Grossett, he can turn it around in the second half of the year and win a second consecutive title.

Given the improved quality of his riding in the past two years, punters at Caymanas Park have endeared themselves to Dick. And he has shown his appreciation by being pleasant, humble and professional, to the extent that he is among the most popular jockeys plying their trade at the Park.

Gets along well with others

Although his English is still not perfect, the jockey said he tries to get along with everyone in the profession.

"I have very good relationship with owners, trainers, grooms, and fellow jockeys," he said.

"That's why, although I'm stable jockey for Mr Nunes, I get rides from all over ... . Trainers trust me because I'm professional. I train hard, eat right and keep fit, which enables me to keep down my weight.

"I also have best agent in the business, my friend Hux. He not only gets good rides from outside stables, but keeps me focused. Because of his input, I was able to win first jockeys' championship last year, which is a big achievement in my life," he adds.

About the chances of UNCLE DONNY in the Derby, Cardenas, who was brought here by the Husseys as their stable jockey at the backend of 2008, had this to say: "The horse not only won the Guineas in April, but come back to run well in open allowance company, and that was good prep for Derby.

"He will have no problem staying the Derby distance, is training well, and although this is biggest test of his career so far, I think he can prove equal to task," he concluded.

Cardenas, the father of a four-year-old son in Panama, has so far ridden 283 winners and counting, locally. The first was ST BESS for trainer Percy Hussey and his mom, Ruth.