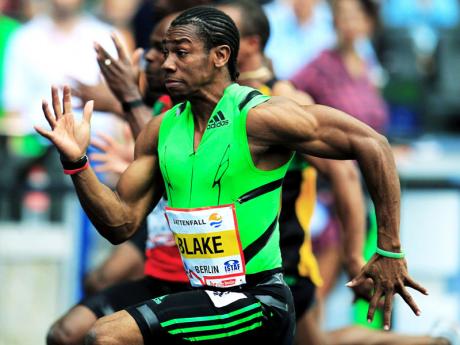 Blake's season best 9.84 which was done in the Cayman Islands last month ranks him as the second-fastest athlete so far this year, as only triple world record holder and Olympic champion Usain Bolt has gone faster, with times of 9.76, 9.79 and 9.82.

Bolt will not run in New York this time around but Blake will have for company Olympic silver medallist Richard Thompson from Trinidad and Tobago and 2012 US Indoor champion Trell Kimmons, with many expecting the Jamaican to lower his personal best 9.82 if conditions are favourable.

Icahn Stadium, the site of Bolt's 9.72 100m world-record run in 2008, will also see the return of the fastest American in history - 2007 world champion Tyson Gay, who will be making his first competitive appearance since undergoing hip surgery last July.

Gay has, however, been entered in the low-keyed 'B' race and will as a result avoid a head-to-head clash with the ever-improving Jamaican powerhouse.

Diamond League leader and defending champion Kaliese Spencer has shown steady improvement on her form earlier this season and will start as favourite in the 400m hurdles. Spencer is the fastest Jamaican over the distance so far this season (54.39) while compatriots Ristananna Tracey and Nickiesha Wilson, both first-year members of the Racers Track Club, will be looking for significant improvements - having both failed to break the 56-second barrier so far this season.

National record holder Jermaine Gonzales will face a stern test from 2004 Olympic champion Jeremy Wariner, who has gone 44.96 so far this season. Gonzales is yet to spark, with the Jamaica Athletics Administrative Association/Supreme Ventures Limited National Senior Championships just a couple of weeks away. Ricardo Chambers and Allodin Fothergill are also down to face the starter alongside Christopher Brown and the second- fastest quarter-miler this season, Luguelin Santos.

David Oliver, Aries Merritt and Jason Richardson are the favourites for the 110m hurdles showdown but Jamaicans will be keen to see how fast-rising Jamaican sprint hurdler Hansle Parchment competes against the world's best including national record holder Dwight Thomas, who is also entered. Parchment has come within three hundredth of a second of Thomas' 13.15 mark and is the fastest Jamaican over the hurdles this season with his 13.19.

Olympic champion Shelly-Ann Fraser-Pryce has seen better form in the past but will be looking to test her readiness in the 100m against world champion and the top sprinter in the world these days, Carmelita Jeter, as well as World Championships bronze medallist Kelly-Ann Baptiste.

Allyson Felix pulled a surprise in the 100m recently when she upstaged a strong field that featured Veronica Campbell-Brown in Doha earlier this season, and the 200m specialist will be looking to further test her hand in the shorter sprint. Schillonie Calvert and Bianca Knight will also be looking to get among the top spots.

Five Jamaicans, headed by Nickel Ashmeade, will line up in the 200m with the impressive Warren Weir targeting another personal best. Marvin Anderson, Nickel Ashmeade, Rasheed Dwyer and Mario Forsythe are also all entered.

Kimberly Williams will be hoping to continue her commendable performances when she competes in the triple jump.