Another blank day in third Test 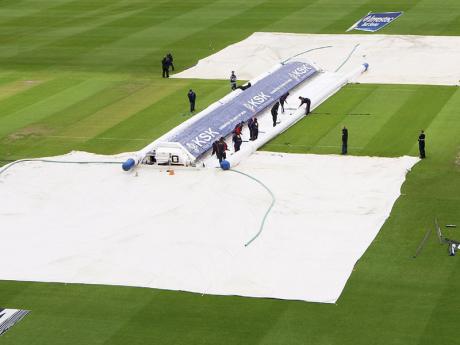 Ground staff at work on yesterday's second day of the third England-West Indies Test in Edgebaston. Another day of rain in the West Midlands forced the abandonment of play for the second straight day.- AP

BIRMINGHAM, England (CMC): Another day of rain in the West Midlands forced the abandonment of play for the second straight day in the final Test between England and West Indies here yesterday.

Officials had little hesitation in calling off play at 1:50 p.m., just minutes after lunch, when it was clear there would be no improvement in the weather.

Thursday's opening day was also abandoned without a ball bowled, and the adverse weather has now effectively reduced the Edgbaston contest to a three-day affair.

It is the first time in 48 years the first two days of an England home Test have been washed out.

However, the forecast for the weekend appears brighter and has offered hope for play on the remaining days, though there are concerns about areas of the ground which remain soggy.

Yesterday's washout may have bought the Windies time to get Shivnarine Chanderpaul fit for the game, after the veteran left-hander went to hospital on Thursday suffering with a side strain.

If he does not play, it will mean the end of his tour as he takes no part in the limited-overs series starting next week.

Meanwhile in the Caribbean retired ICC Elite panel umpire, Billy Doctrove, has vowed not to turn his back on umpiring and says he would like to help the emerging generation of officials in the Caribbean.

"I think that I still have a lot to contribute as an umpire. I want to be involved, be it at Dominica, Windward Islands or regional level," said the 56-year-old.

"I firmly believe that I have a contribution to make and I feel that I can play a part in helping young umpires take that next step. So I do not believe that I will turn my back on umpiring.

"It is just that I have retired from international umpiring just to be in situation where I can be closer home and to spend more time with the family."