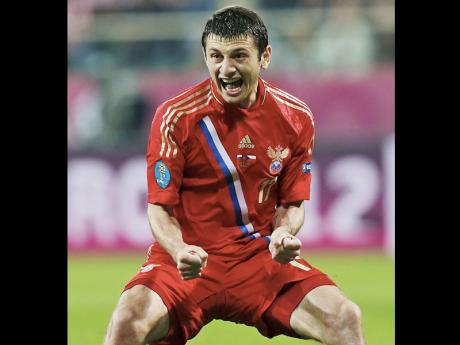 Russia's Alan Dzagoyev celebrates after scoring his side's third goal during the Euro 2012 Group A match between Russia and Czech Republic, in Wroclaw, Poland, yesterday. - AP

WROCLAW, Poland (AP):Alan Dzagoev scored a goal in each half in Russia's masterful display of attacking football to beat the Czech Republic 4-1 in their European Championship Group A opener yesterday.

Dzagoev and Roman Shirokov gave Russia a 2-0 half-time lead before Vaclav Pilar in the 52nd minute game the Czechs brief hopes of a comeback.

Dzagoev replied with his second in the 80th minute, and substitute Roman Pavlyuchenko added a fourth in the 82nd.

Russia, surprise semi-finalists four years ago, showed they had the potential to go even further in Poland and Ukraine.

If Euro 2012's opening 1-1 draw between Poland and Greece had more drama than quality, the second group match was a feast of offensive football.

Russia coach Dick Advocaat said before the match he considered his team outsiders for the title, but may have to revise his opinion after the emphatic victory. Of course, Russia are unlikely to meet many defences as accommodating as the Czech back four.

After weathering a tough opening 10 minutes, Russia settled into their fluid passing game and tore apart the Czech defence.

Dzagoev sent home a loose ball after Konstantin Zyryanov floated a cross to the far side and Aleksandr Kerzhakov's header hit the goalpost and bounced to the CSKA Moscow midfielder in the 15th minute.

Dzagoev should have scored again minutes later, but blasted his shot wide after Kerzhakov found him free on the right side.

Shirokov made no such mistake in the 24th minute when he ran on to a diagonal pass from the left by Andrei Arshavin and cleverly lifted the ball over Petr Cech's desperate dive for his seventh intentional goal.

After Russian chances early in the second half went off-target, the Czechs replied. Pilar beat the offside trap to run onto a pass from Petr Jiracek, get around Vyacheslav Malafeev and slide the ball home in the 52nd minute.

And after Kerzhakov missed two more good chances, Czech Republic right back Theodor Gebre Selassie nearly scored a spectacular equaliser in the 72nd. His powerful right volley went into the side netting, and Tomas Rosicky came close with a low shot that Malafeev saved.