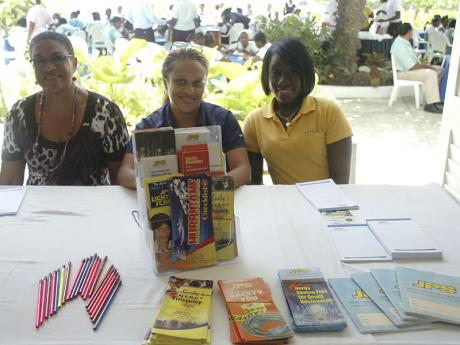 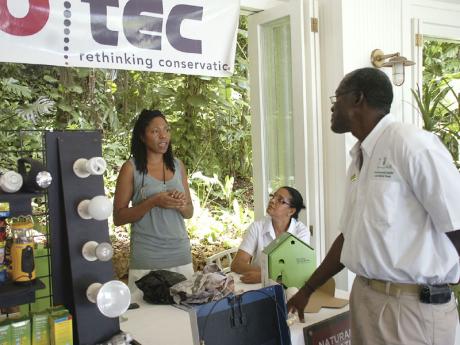 Barrington Taylor, conservation officer for the National Environment and Planning Agency's eco-systems management branch, shares information on Jamaica's endangered animal species with Nathalie Saunders, director of human resources and training at the Round Hill Hotel and Villas in Hanover, during a World Environment Day exposition held at the hotel on Tuesday under this year's theme 'Green Economy: Does It Include You?' -Photos by Christopher Thomas 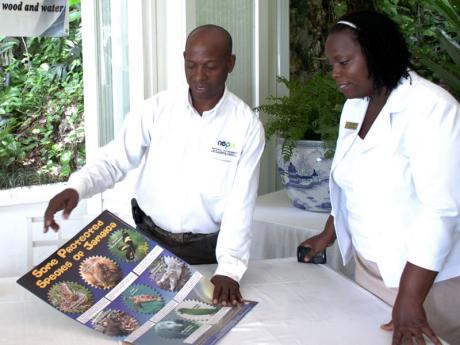 WESTERN BUREAU:The Round Hill Hotel and Villas in Hanover was the scene of environmentally themed skits and poems by several schools from the parish and booth presentations by the resort's partners on Tuesday.

The activities were part of the hotel's celebration of the United Nations-sanctioned World Envi-ronment Day (WED), which is celebrated annually on June 5.

This year, WED is being observed under the theme 'Green Economy: Does It Include You?'.

Seven of Round Hill's business partners and suppliers set up booths in the hotel's Hanover Room to showcase environmentally friendly products, tips on preserving Jamaica's natural environment, and even financial advice for the resort's employees. These included representatives from the National Water Commission, the National Housing Trust, Capital and Credit Merchant Bank, and the Clarendon-based Hi Tech Chemicals Company, which makes its products from natural sources.

Four Hanover-based schools - Watford Hill Primary, Hopewell High, Bethel Primary and Junior High, and Cacoon Primary - delivered messages in song, dance, and poetry on the need to care for and protect the environment.

"Being an environmentally friendly hotel, Round Hill has always been actively involved in our environmental awareness," said Round Hill's general manager, Omar Robinson.

"Today being World Environment Day, we thought it would be fitting if we had some of our suppliers and partners, who are involved in the whole energy and environmental field, to come in and get our staff exposed to and updated on alternative options out there that they can utilise in their homes to reduce their carbon footprint and their dependency on electricity and reduce their light bills and everything," he added.

Robinson said the presentations and booth exposition were very timely as Jamaica is now in the Atlantic hurricane season, which officially began on June 1.

"We tend to dump everything into our gullies, and solid waste needs proper management. We need more education, more awareness in the general public, the dos and don'ts, and what impact it has."