Short Story - The night of the soldier crabs 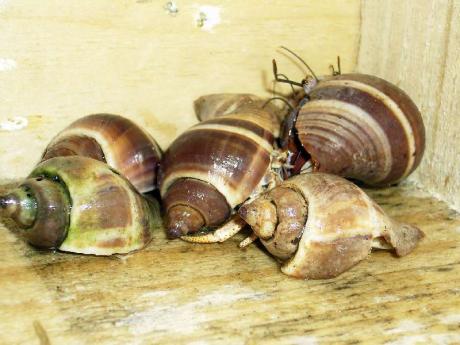 In his youth, going to the beach was always a thrill for Barrington. It wasn't so much of the sun, sea and sand, but the fascinating sea creatures, spider crabs, soldier crabs, sea urchins, starfish, molluscs of various sizes and shades pasted to jagged rocks.

When everybody would be busy frolicking, he would stray to pursue and collect these creatures. The soldier crabs, known also as hermit crabs, were the most interesting. They were found in all types of shells, some too big. Back home, soldier crab races would be staged. This created much excitement among the children in his community.

Time passed, and so did Barrington's interest in soldier crabs. But the seaside, especially the clean, unpolluted parts, is still a place he goes to. There's something so primal about the sea and the places where it meets the land, two different elements in a sort of harmonious juxtaposition found nowhere else. Collecting variegated pebbles, driftwood and seeds on the beach is now one of his hobbies.

Yet, recently, when he went to a fair in Clarendon, while sitting on a chair enjoying himself, something caught his eyes. Little creatures moving in a bucket. He stared at their glossy, brown-striped shells in amazement, and memories of his childhood days hit him so hard, he leapt from the chair and dashed towards the bucket of colourful soldier crabs. These crabs were more beautiful than any he had seen before, and they were for sale.

In his childlike excitement, he chose six, taking time to be quite selective. When he was finished, the vendor put them into a plastic bag, filled it with air, and tied it. After admiring them through the plastic Barrington put them into his shoulder-bag.

Back home, late that night, he put the bag down near his bed, showered, and crept into the bed beside his wife, Gladys. Soon, he was off to sleep.

Gladys got up sometime after 2 a.m. for the bathroom. When she returned to bed she heard scratching sounds. They persisted, but she thought it was the soursop tree brushing against the wall outside. Sleep took her over again, but the sounds continued.

Meanwhile, in dreamland Barrington was, in a room, tied to a bed. At the foot of the bed was a giant soldier crab staring angrily at him. Its eyes glowed a purple hue. Barrington wanted to shout, but his mouth was locked. Then he felt movements all around him on the bed. The sensation was like that of a soldier crab walking on his skin. The giant one was still there waving its big claws, as if directing an orchestration.

Then it was certain. All over his body were little soldier crabs, crawling on and pinching him. One was now clinging to his beard, making its way up to his mouth. He squirmed, turned and tossed. There was one on his forehead. He flashed his head. It
didn't budge. Another was nibbling at an ear lobe. The one on his beard
had reached his lips.

At the foot of the bed, the
giant soldier crab had disappeared. It was replaced by scenes from his
childhood days; the hunting of the crabs, the races, and the times when
he put lit matches at the tips of the shells so that the crabs would
spiral out of them, only to expose their corkscrew-shaped
bodies.

As the one on his bottom lip was about to
enter his mouth, he took in much air and made one bloodcurdling scream,
screaming out of the nightmare.

Gladys, too, jumped
from her sleep, and rushed for the light
switch.

"Barrington, what is
it?"

Sweating, he rolled off the bed on to the floor,
near the bedside table on his side. He found the bag, pulled the
zipper, groped into it, and came out with a mangled plastic
bag.

"What is this though, Lord, what are
you talking about?"

"What soldier crab are you talking
about?"

"The ones I bought yesterday at the
fair."

And with that he went under the bed, searching
frantically. No luck. Everywhere, and all over he went, room to
room.

While the embarrassed Barrington was in the
bathroom searching, it appeared to Gladys that the scratching sounds she
had heard the night before were coming from the crabs. She looked at
her bedside table and moved towards it. With a deep breath she shifted
it. In the corner, huddled together, as if sleeping, were six
brown-striped soldier crabs.

"Barrington!" she
shouted, "here are your blasted crabs, come
along!"

As he re-entered the bedroom, he looked at
Gladys, whose eyes were fixed on the crabs in the corner. She made way
for him.

Late morning, when Gladys was calm,
Barrington told her about his childhood fascination with soldier crabs,
and the dream. But when she proposed that he kill the crabs which were
then secured in a metal container, and use the beautiful shells to make
earrings for her, he flew into a rage, put on his shoes, grabbed the
container, and jumped into his car.

"To the sea, Gladys, where they belong." And
with that he sped out of the yard.

Gladys smiled to
herself, and said, "He's forgotten that my Zodiac sign is Cancer. I am a
crab."