'The Mirror of the Eyes' a provocative literary gem 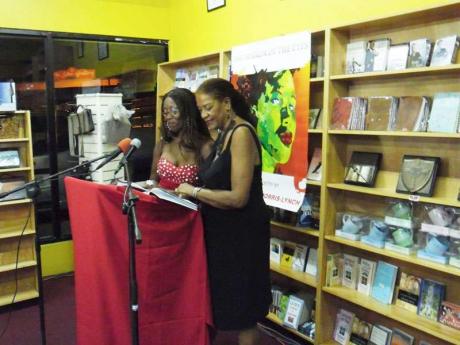 Poet Millicent Lynch (left) reads one of her poems from 'The Mirror of Eyes' with MC Dr Blossom O'Meally-Nelson at the launch at Bryan's Bookstore, The Springs, St Andrew. - Photo by Robyn Miller

Millicent Lynch emptied her soul for literary lovers two Wednesdays ago in a way, she said, she has never done before.

Perhaps hinting at what was to come, she made her way across the room with a self-assured smile topped off with a stoplight-red, body-hugging dress, halted just above the knee, complete with blue heels and dazzling accessories that scorched like the merciless temperatures that had earlier bathed the city.

Then, with the gathering of friends, family, and well-wishers on hand, the effervescent and multifaceted Milly (as she is fondly called) launched her provocative book, The Mirror of the Eyes, with an amazingly inviting Bryan's Bookstore in The Springs, St Andrew, playing host.

A "collection of thoughts, poems, and experiences", Millicent, who is a dancer, actress, teacher, mother, marketer and now poet, confided that had it not been for the inspiration of friends, the book might not have been a reality. In fact, she said some of the pieces selected were written long ago and were merely gathering dust.

With constant encouragement from persons such as high commissioner to London, Aloun Ndombet Assamba, who telephoned late at nights to tell her about the rave reviews her poems were getting, it wasn't long before Millicent would yield to those overtures.

In a matter of three weeks, Millicent compiled enough material for The Mirror of the Eyes and, in her very first public reading of her work, she told her audience of 'The Encounter'.

Friends Rowena Minott and Cheryl Crooks followed with 'Air Jamaica' and 'Make Me' from the book.

In 'Air Jamaica', Minott brought back memories of a not-so-distant past, evoking much laughter, as she eased into her role as purser on the Lovebird to announce yet another delay for take-off over the PA system to passengers.

There was even more appreciation for Crooks, who dared her audience to 'Make Me' as she sliced through a silhouette of sultry endearments and caressed every word as she went along.

Guest speaker Gaudia Chevannes-Aquart, who called the writer "an overcomer and a doer", followed with the contemplative 'Lately', but not before DiMario McDowell's well-received interpretation of 'Let Her Cry For She's A Lady', for which he got some help from Janet Silvera.

A friend and business partner at Dynamic Event Services, Silvera said the book was bound to provoke the reader.

"Milly's book is a book you can take to bed ... there is so much provocation that if you do not have any lead in your pants ... you can ignite a lot of fire," she teased, to loud roars from the floor.

Although this is her maiden outing as a writer, The Mirror of the Eyes reflects a wide range of moods, and Millicent insists there is something for everyone.

Everybody can find a poem," she beamed while singling out a few. And while Millicent admits she doesn't have a favourite, she said, "They all mean something special to me because they all came from different depths," attributing her overwhelming love themes to her love of life and people, who she said is the inspiration behind the book.

The Mirror of the Eyes is distributed by Bryan's Bookstore and is available at all major book stores.