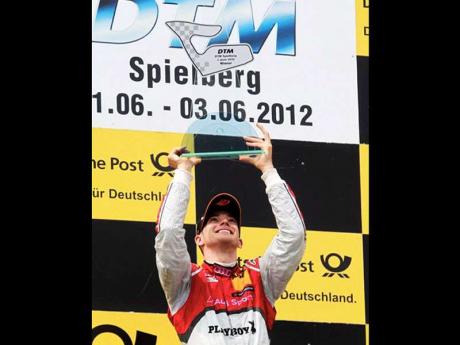 After starting from pole position, Italian Edoardo Mortara won the fourth round of the 2012 DTM at the Red Bull Ring in Austria in front of 48,500 spectators last Sunday. This marked the new Audi A5 DTM's first race victory.

Mattias Ekstrsm improved to second place in the standings.

Despite a less-than-perfect start, Edoardo Mortara in his Playboy Audi A5 DTM entered turn one as the race leader and controlled the pace at the front of the field throughout the entire 47 laps.

After the second mandatory pit stop, Mortara had to fend off attacks by leader of the standings Gary Paffett (Mercedes-Benz) and Martin Tomczyk (BMW), which involved a number of fierce duels. Mortara kept his cool and ultimately crossed the finish line as the winner with a 1.068-second advantage.

Mattias Ekstrsm (Audi Sport Team Abt Sportsline) also had to fight hard for his fourth place, which saw him improve from third to second place in the standings. At the start, the Swede had taken the lead in his Red Bull Audi A5 DTM, but then dropped all the way to fifth place in the commotion of the hectic first lap.

He immediately managed to overtake Mercedes driver Jamie Green again, and closed the gap on Gary Paffett in the final phase, but could not pass him.

The fastest lap went to Timo Scheider (AUTO TEST Audi A5 DTM). The two-time DTM champion advanced from position 16 on the grid to sixth place, despite having to run through the gravel trap once, after being hit by Augusto Farfus.

A strong performance also came from Rahel Frey (E-POSTBRIEF Audi A5 DTM), who maintained her mid-field position before dropping to 15th place after a drive-through penalty imposed for having exceeded the speed limit in the pit lane. Miguel Molina was forced to park his Red Bull Audi A5 DTM after 17 laps, having been bumped several times. Even shorter was the race of Adrien Tambay (Audi ultra A5 DTM). The youngster was forced into the grass on the starting lap and had to retire.