OUR pares JPS back billing to two months; six years for exceptional cases 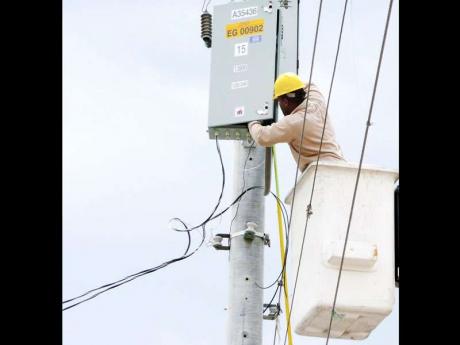 A JPS technician at work. - File

The Office of Utilities Regulation (OUR) last Wednesday slashed in half the period in which power provider Jamaica Public Service Company Limited (JPS) can back-bill customers.

Under the JPS Revised Back Billing Policy, the company can now back-bill for two billing periods, equivalent to two months, down from four periods. But there are instances in which the utility will also be able to collect for electricity usage extending back six years.

The two-month measure mainly allows JPS to rectify incorrect or under billing or to collect in instances where bills were not generated due to internal system faults.

Importantly back-billing for meter tampering and fraud remains at six years, while corrections to overbilling arising from a JPS error or omission also remain at six years.

"This is not to be described as a victory for anyone because it is the means by which the regulator is bringing balance and fair play to a system which had been out of step with international norms," said Michael Bryce, director of consumer & public affairs at the OUR.

"In terms of cost, it is not about how much it will cost but about how much can be recovered. This cannot be quantified until each case is completed and judged according to merit," he said.

The revised policy is supposed to align with best practices in the United States and United Kingdom, and protect both JPS and its customers.

Queries to JPS on the impact of the revision on its operations went unanswered up to press time. The power company's annual revenues now tops US$1.15 billion or J$99.9 billion.

Last year, the OUR directed JPS to revise its back-billing policy and procedures in accordance with recommendations contained in the report Investigation of the JPS Billing and Metering System for Electricity Consumption.

The independent investigator and former OUR director general, J. Paul Morgan, concluded that JPS's back-billing policies did not accord with "best practices" and did not sufficiently protect the rights of customers.

"Under the revised policy, there is now a reduction in the maximum period - from four to two - for which an account can be back-billed in several instances," said the OUR in a release explaining the measure.

JPS is now required to issue the Revised Back Billing Policy as a Code of Practice and make it publicly available in accordance with Condition 16 of the Amended and Restated All-Island Electric Licence of 2011.

"In cases where the account is not registered in the JPS Customer Information System or the meter is not included in the JPS meter database - dummy meter - and therefore was never billed, and the non-registration in either case is not due to an error or failure by JPS, the account shall be back-billed or adjusted for the period for which the customer/user received the unauthorised benefit but not exceeding six years. In such a case, the customer shall have the responsibility of providing the evidence of the date of installation of the dummy meter, if a period of less than six years is to be applied in the circumstances," said the OUR in its determination notice dated May 2012 but released last week.

"Where an account has been overbilled or subject to excess charges, because of an error or omission by JPS, or a condition of the meter or service installation infrastructure, JPS shall adjust or back-bill, as appropriate, the account for a period not exceeding six years or for the exact period for the overbilling occurred, whichever is less."