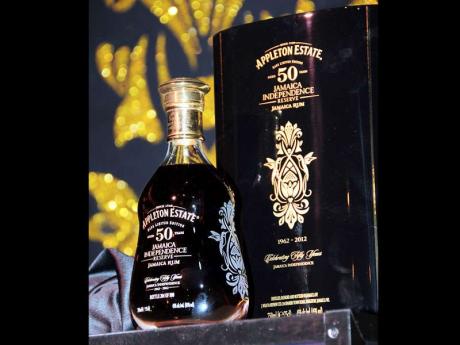 Wray & Nephew is also planning to launch a 100-year-old rum for Jamaica's centenary celebration. The Jamaica Independence Reserve comprises rums aged for a minimum of 50 years in oak barrels. Only 800 bottles will go on sale globally for this rum, described as the oldest aged rum in the world, according to Wray & Nephew's managing director, Paul Henriques, who addressed Jamaica House at the launch.

"Rum is like people: it gets temperamental as it ages. But Joy Spence, master blender, has done a phenomenal job. The result is a spectacular rum which is the world's finest," said Henriques.

"We are very pleased to announce that we are making plans for the 100th anniversary, and to this end, will host a function where each living prime minister will pour a bottle from the 2012 crop that will age for 50 years to be used to celebrate the 100th year of Jamaica's Independence when I am long gone."

Spence later clarified to Sunday Business that the 100th independence edition would age for 100 years rather than the 50 implied by Henriques' comment.

More than the sales, the company believes this product will raise the profile of its mass-market brands.

"This will emphasise the 'premium-ness' of Appleton. It's a halo for the other brands of the estate to bring them up," Spence said.

The vision for the Jamaica Independence Reserve began with 24 barrels in 1962, but evaporation reduced that to 14 barrels, Spence explained, saying the project was initially overseen by Appleton's previous master blender, Owen Tuller.

Spence describes the rum's appearance as a dark mahogany colour with rich coppery reflections, including a very pronounced green ring of ageing.

The smell includes a powerful oak infused with rich vanilla layered with cinnamon, maple, and orange peel, its taste is smooth, with a honey oak finish.

The Appleton Estate 50 is packaged in a crystal bottle with real gold etchings of Jamaica's national symbols. It is topped with a gold-finished brass and cork stopper and is placed in a black lacquered gift box with gold-finished brass hinges. The package also includes a commemorative booklet outlining Jamaica's march to Independence and the journey of the Appleton Estate 50-Year-Old Jamaica Rum.

Wray & Nephew, which has operated for some 260 years, is the cash cow for its parent, Lascelles deMercado, group.

"I want to commend the private sector and the public bodies for partnering with us to celebrate our 50th year of Independence," said Prime Minister Portia Simpson Miller at the launch.

"This includes Wray & Nephew ... and I hope the company remains in good spirits," she said.