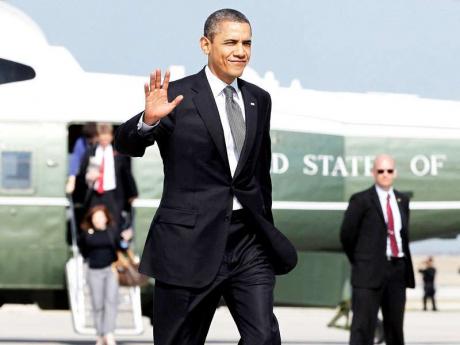 US President Barack Obama ... he has also signalled seismic shifts in policy relative to Asia. - File

Almost everyone reading this will have grown up with a map of the world that places Europe at its centre, with the Americas to its west, and Russia to its east.

But imagine a very different orientation, one that places the International Date Line in the Pacific at its centre.

This map would show the Americas, including the Caribbean on the eastern side of the Pacific's vastness, and to the west of the line, China, India, Australasia, and much of Russia, plus other advanced developing economies.

It would also place Europe as a mass of small nations at the western periphery of the world.

While we all tend to see wherever we come from as the world's centre, a mental map of this kind ought, at the very least, to be held in our heads to locate the way in which economic and political power is being relocated.

For more than a decade now, the reorientation of global thinking to take account of the rising economic power of China, as well as Brazil, South Africa, Russia, India, and others has been under way.

For the United States (US), it speaks to the eventual emergence of one of more equivalent global economic powers, and confirms that all future US administrations, irrespective of political rhetoric, will have to accept the reality and the consequences.

The necessary change in posture on the part of the US was formally recognised earlier this year when President Obama revealed a new defence strategy that cut budgets, switched the focus to the Asia-Pacific region while seeking to maintain global military superiority.

His plans were spelt out in more detail on June 2 when US Defence Secretary Leon Panetta confirmed that the US was moving the weight of its military assets to the Asia-Pacific region.

Although largely reported in military terms in relation to China, it re-emphasised the need for the Caribbean to begin to think very differently and strategically about where the balance of its future relationships will lie in the next decades.

In Singapore, Mr Panetta suggested that the US was 'part of the Pacific family of nations', and in accordance with the president's guidance, was making the Asia- Pacific region the US military's top priority.

He made clear that while the US military will remain a global force, it will rebalance towards the Asia-Pacific region through the creation of new partnerships and alliances involving nations including Japan, Australia, and Thailand, and will establish a growing military presence in northeast and southeast Asia and in the Indian Ocean.

He did not make clear the nature of the threat the US perceives in the Pacific Basin other than to say that the intention was to "strengthen the capabilities of the Pacific nations to defend and secure themselves".

Despite this, he left the distinct impression that from the location of new bases and relationships, the US's principal object of attention was China and its neighbouring seas.

Despite, or perhaps because of this, Mr Panetta stressed that the US saw China as a partner.

"We believe China is a key to being able to develop a peaceful, prosperous, and secure Asia-Pacific," he said.

"Both of our nations recognise that the relationship ... is one of the most important in the world." Subsequently, the Pentagon stressed that the peaceful prosperous rise of China is a good thing, not just for the region, but for the world.

China's response was measured. The Chinese Foreign Ministry spokesman, Liu Weimin, referred on June 4 to the new US military strategy as "inappropriate".

Liu pointed out that seeking peace, pursuing cooperation, and promoting development were the current trends and the predominant sentiment in the Asia-Pacific region.

This is where, he said, China and the US have the most overlapping interests; that "China hopes the United States plays a constructive role in the region and respects the interests and concerns of all parties in the region, including China".

What all of this suggests is that the Americas and Europe, irrespective of the polite rhetoric, have become far less relevant to the US's long-term strategic objectives.

Latin America is stable and developing rapidly, Brazil represents an alternative pole in the Americas to the US, and narcotics and terrorism issues apart, the hemisphere poses no significant security threat to the US.

For the Caribbean, this seismic shift in US policy makes clear once again the need for the region to have a coordinated global approach to foreign policy, a matter stressed only recently by the secretary general of Caricom, Irwin LaRocque, when foreign ministers met in Paramaribo.

Pointing to the transformative changes under way in the world, he made clear that there was a need to understand its underlying features, seek to influence it, or adapt accordingly, or be left behind.

He also pointed out that coordination of foreign policy was essential to address the wide range of challenges the region faced if, for example, the G-20 and other international decision-making bodies were to be sensitised to the concerns and needs of the region.

In the subsequent communiqué, ministers seemed to recognise the changes that were taking place, referring to the systemic and technological changes to the environment in which diplomacy is practised, but suggesting that coordination remained difficult because of the divergent economic and political interests of individual sovereign member states, the absence of capacity, and so on.

What this implies is that until the Caribbean can address its own fragmentation, its inability to provide a narrative in its own terms about its future place in the world, and accelerate the pace at which it adapts to the way the world is changing, its needs are unlikely to be met.

This is unfortunate. As recent developments suggest, a moment will come before long when the Caribbean's relationships with China, India, and others need to be pursued regionally if the Caribbean is to have any weight at all in a world that is genuinely multi-polar.

David Jessop is director of the Caribbean Councul. Send feedback to david.jessop@caribbean-council.org