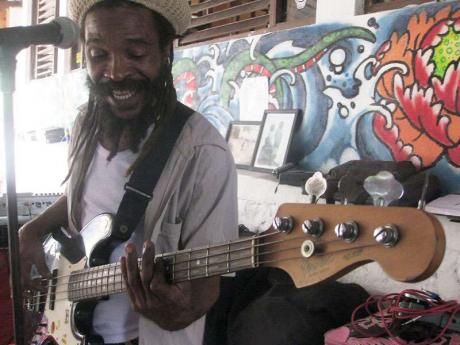 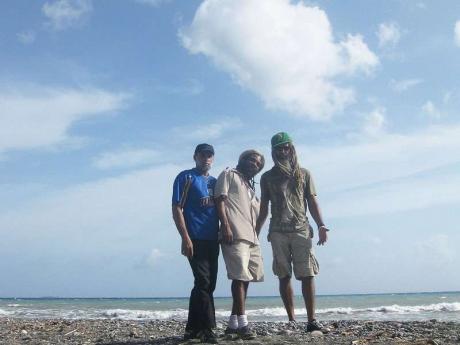 It is early Wednesday afternoon when The Sunday Gleaner turns off the St Thomas main road at the sign which announces Jamnesia, just past the well-known Little Copa beach. It is a small sign for a name that looms large in live music and surfing, the former taking place fortnightly with Raging Fyah, Protoje and No-Maddz among those who have built sterling reputations and followings there. The surfing is more frequent, the opportunity depending, in large part, on the swell of the waves.

At the juncture of riding rhythms and riding waves, standing splay-legged and upright at a microphone, guitar in hand, or legs wider apart and crouched on a surfboard is Billy 'Mystic' Wilmot, lead singer of the Mystic Revealers.

Today, the waves are good but it is an afternoon for the ebb and flow of reggae.

There is another kind of wave to catch, much further away than the beach, which is less than 30 of Usain Bolt's long strides from the veranda where the band is set up, as a leaner Mystic Revealers plan a return to touring in Europe.

The trio rehearsing is the longstanding core of the Mystic Revealers: Nicky Cymbal on drums, Lion on bass and Billy on rhythm guitar.

But there are additional roles, as Billy is not the only one singing on Got To Be a Better Way, his gently urgent vocals articulating the need for a different approach to the organisation of human life enhanced by Lion and Cymbal's harmonies. It ends and he calls the next song, the slower Righteous, the pace picking up again for Borderline.

The trio ends with a repeated "try".

They are in "try" mode at this phase of Mystic Revealers, scaling down from their customary large performance outfit ("It was like a orchestra," Billy says) to the three of them, Lion and Cymbal having to add harmonies to their onstage roles. A keyboard player is added at times. The adjusted multi-purpose Revealers have been honing their sound on and off since January, at an average of about one rehearsal per week.

They have a lot of material to draw from, the albums including Young Revolutionaries, Space and Time (which had a dub version) and Jah Works. Mystic is also certain that they have an established audience to play to.

"The plan is to tour Europe first," he said, although "me nuh mark out nuh country. Our history attest that we tour all over. We getting a lot of interest from that side in different countries. Promoters that side are willing to work with each other to promote live reggae."

They reel out a number of festivals at which they previously played and, for a few minutes, they are in another space and time.

"All those places we left an impression," Mystic said. Chief among these is giving the Jamaican booth a boost at the World Expo in Seville, Spain, in 1992. Mystic Revealers was on tour and got involved with the booth, literally turning up the ratings thermometer at the entrance to the huge event to put Jamaica on top. After they had moved on to Japan, they were asked by the organisers to return for the main show, flying back against the revolution of the earth.

"That was a show!" Cymbal said, Lion adding, "When we reach we don't know what day or time it is."

Mystic Revealers enjoyed much more commercial success outside Jamaica than at places within driving distance of their long-time Jamnesia base. "Our music was so unique to the moment in time when it was created," Billy said.

"They hear Mystic Revealers and cannot put a time on it. It is so unique."

Part of that individuality was refusing to go with the 'riddim' trend that swept Jamaican popular music in the post-Sleng Teng era from 1985.

"They (the songs) were not produced for what was happening at the time or it would be Sleng Teng. 99.9 per cent of our rhythms were original. If you look through, you might see a one credit to someone else," Billy said.

"We were not rhythm riders. We were creators of original music. That was what people were looking for from Jamaica."

Not going along with what was in vogue had its consequences, as Billy said, "that's why a lot of things pass us locally, but picked up abroad. Them time people a look for what Bob Marley and Third World presented to them as reggae music. Peter Tosh was so different, Burning Spear was so different. They were all doing reggae, but had their individual sound, as opposed to people who sounded homogeneous."

So Mystic Revealers took headline slots, or performed just before the headliners, at the concerts and festivals they played outside Jamaica. "We were not the opening act. Only in Jamaica on international night them want to put us as the opening act," Billy said.

"At the time Jamaica hear 'bout we, them only know 'bout Religion (which was supported by a video), one tune on one album. Outside, people knew the albums".

The band was on an Atlantic sub-label called Mesa Blue Moon, along with Aswad and Steel Pulse.
All the reggae groups were axed simultaneously in the 1990s and Billy
analyses Mystic Revealers' return to touring in the context of how the
download era has changed the business of music.

And
that leads into why they are now doing their own
harmonies.

He does a simulation of the negotiation
procedure, from the number of racks for an album to working out the
recording, publicity and touring arrangements, including how the tour
would be financed.

"If them invest US$40,000 in your
US tour, they will see the return on Monday when people get hype up and
go out and buy," he said.

"Now, you don't have the
support. You can't carry 15 man on tour. Now, you not selling a product,
yuh selling an image. You can only sell the live performance of the
show. Back in the day, is the sticker you give away to people. Now is
the music. You give the music and hope people like the image. Then you
hope you get a sponsor to support the image," Billy
said.

"You have
to present yourself as an acceptable product to whichever sponsor you
want."

However, he adds that he is working out the new
music business framework. "Me a anticipate it is something like this.
Me jus' a search in the dark like another man," Billy said. "Until you
have someone in Mystic Revealers career to replace (record labels) Ras,
Mesa Blue, Atlantic, it will be on our shoulders. We can't carry harmony
singers," he said.

Neither can they tote along
musicians of the calibre that, in the early stages of Mystic Revealers,
helped carry them.

"We are self-taught musicians. When
the attention was focused on us, we were basically not professionals in
the field, but young, self-taught amateurs with high aspirations and a
high amount of self-confidence. That was what was driving us. We were
very confident. We had a lot of professionals enhancing the core sound,
which enhanced the band," Billy said. They also used only the best
studios.

Those professionals were the best, among them
Robert 'Patch' Walters, Noel Davy and Earl Fitzsimmons on keyboards,
Steve Davis, Rudolph Bonitto and Clarence Charles on guitar, Winston
Stewart on guitar and keyboards and Sky Juice on percussions, William
Cocking being the band's first percussionist. An additional keyboard
player was required to play the horn section. Add to the many musicians
the harmony singers, and it was a large party
onstage.

For his
rhythm guitar at the time, Bully said, "It turn down low. It become part
of your persona, as opposed to adding to what people
hear."

Now, the core of the Mystic Revealers is all
that people will hear when they go onstage, harmony and all. Billy, Lion
and Nicky are not worried about being a smaller, multi-role
outfit.

"We have already proven our worth. Promoters
can relate to us on our reputation, based on what we have done," Billy
said.

And, at this point, neither is he overly
concerned about putting out new material to a long-established audience,
although he has sufficient songs written to put out a new album.. "They
miss hearing us. They don't miss our new songs that they have never
heard," Billy Mystic said.

Then it is back to the
music, drum and bass removed as Billy leads a love song and Lion
harmonises to "Saw you standing there/and you got flowers in
your hair/and you're wearing the prettiest dress I have ever seen/that's
how you look to
me".