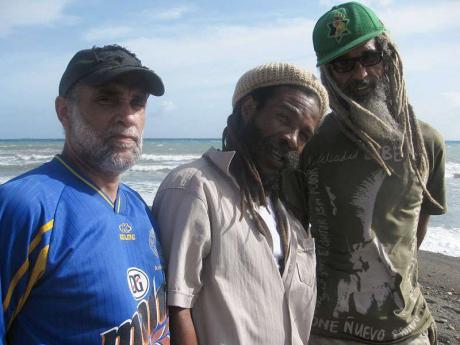 Billy Mystic was angry when he wrote Mash Down Apartheid, which became Mystic Revealers' second release after debuting with Winner.

"You a hear 'bout it and the South Africa thing and as a Rasta youth I find myself a feel so strongly as a result of this religious fervour me find myself in," said Billy Mystic.

"It was an anger-driven kind of song," he said. Writing different songs brings various facial expressions, he said, "some you laugh, some you pensive. This time, when you a do it you a wring up you face, you a mark up the paper say you want a stronger word here so. Them things nuh tek long fi write. One piece a paper an yuh done."

I don't believe in apartheid

I think anyone who does

Must be some kind of fool

Cause we know it's wrong

And I and I know they won't last long

That's why we're around

We can unite and mash them down

Mash them down to the ground

When they were playing it at his Bull Bay home, they had an unexpected listener and very enthusiastic supporter in Peter Tosh. The band was rehearsing and Tosh was on the very popular beach, bass player Lion said. Drummer Nicky Cymbal added, "We had Jackie Mittoo on keys that day".

According to Nicky Cymbal "the man come in the room. Him say 'a fi oonu tune?'". They said 'yes' and Tosh gave it his stamp of approval.

"Da tune ya, a one [expletive] tune!" they quoted Tosh.

"De man rate we up, rate up the tune," Billy said.

"Him say him a go pon tour and when him come back him ago record wi. Wi feel good. As him come back from tour him dead," Billy said. Tosh was murdered in Barbican, St Andrew, on September 11, 1987.

However, another Jamaican superstar came to the band's assistance, Jimmy Cliff producing Mash Down Apartheid and also providing a link with the African National Congress (ANC). Mystic Revealers donated the proceeds from the song to the ANC, but had to take an unusual route to hand over the funds.

It was difficult to get in touch with the ANC physically to hand over donations, so they were registered as the producers of Mash Down Apartheid. The donation was appreciated, a letter from the ANC encouraging the band to continue singing songs of freedom.

Mash Down Apartheid was included on the Young Revolutionaries' album and was a part of their live set.

First performed live in New Kingston, the band also did it at a Fault Line concert in Jacks Hill, the first large-scale exposure coming at the 1988 Reggae Sunsplash Beach Party.

A SONG TO THINK ABOUT

It was also a part of Mystic Revealers' first European tour, which took them to England and Wales.

However, as times changed Mash Down Apartheid was no longer performed live. "After Mandela release, we ease off that," Nicky Cymbal said.

"It was more of a political statement than looking for a hit. It was a song not for people to dance, but think about," Billy Mystic said.