Bob Andy, the lyrics of a genius 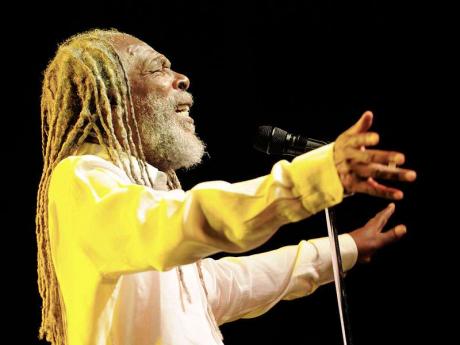 The songwriting skill of Keith Anderson, better known as Bob Andy, is not well documented in the history of Jamaican music, yet the man is rated by many as the best the island has ever produced.

Andy is very humble in accepting the accolades showered on him concerning this aspect of his career when he states, "I must really start accepting the credits these people are giving me for writing, because a lot of the times I am so modest that I say, 'Well, if I was a good carpenter, I probably would make good chairs too', but I really set out to craft these songs because they represent my aspirations and they were gonna represent me for life. The thing I wanted most in life was to have an education and the thing that eluded me most was getting that education, so I had to prove to the guys that went to school that I could do better than them." Salient words that came out of an interview I conducted with Andy for radio back in 2005.

A founding member of the Paragons singing group, Andy began singing with Tyrone Evans as a teenager at the back of the Kingston Parish Church in the very early 1960s. The duo recorded their first song for Duke Reid's Treasure Isle record label. The song, titled I'm In Love, was a cover of The Cliques 1950s doo-wop song.

Howard Barrett, a Kingston College chorister, soon joined them, to be followed by John Holt, a young man with sublime vocal delivery.

Shortly after, they expanded to five with the |temporary inclusion of Junior Menz, who was on vacation, and the name Pentagon was contemplated.

However, when Menz left to join the Techniques, they settled with the quartet of Andy, Evans, Barrett and Holt, and named themselves Paragons, the name of a defunct US doo-wop group, brought to them by Menz. Venturing to Clement 'Coxson' Dodd's Studio One, the group auditioned and was immediately accepted. Their first recording for Dodd, In Love At Last, written by Andy, became a top-10 hit. But Bob had what he described as 'issues' and left the group shortly after.

He returned to Studio One with cautious optimism as a solo artiste and with the full knowledge that he no longer had the security of the group. Coxson, upon realising that he had some knowledge of the piano, entrusted him with the responsibility of conducting auditions.

According to Andy, many of the early Studio One artistes 'passed through his hands'. But even before he began his solo singing and writing exploits at Studio One, Andy was a record carrier for Coxson, which was a quicker way of earning a living.

His writing skills really came to the fore in about late 1966 on his first recording there, titled Crime Don't Pay, in which he admonished unruly youth.

Think about a home, think about a future too, don't be satisfied with your way of life, you have nothing to derive.

You had better change your bad ways,

Forget the past and turn a new page.

He followed up with a mixture of extraordinary, heart-rending love songs, revolutionary songs and soul-searching songs, all of which he composed.

His rendition of My Time was particularly touching:

My resistance is getting weaker, I can't stand the pressure,

I can't be any weaker, I got to find me some of the treasure,

I need nothing to be a man for I was born a man,

And I deserve the right to live like any other man.

Let Them Say was even more poignant:

But the people don't realise the pangs of hell that I feel,

So let them say I'm mad,

They don't know how it feels to be sad

I don't know who could be glad in a situation like this.

Feeling Soul detailed the sacrifices necessary to attain this:

If you're to feel it (soul) you've got to be clean

You've got to make it straight, you can't be lean,

To the true soul you've got, go cling'

Traversing the area of love and romance, Andy emphatically claimed in the interview, "Although I sing so many revolutionary songs, the other side of my nature is very gentle and sentimental."

His self-produced recordings of Honey in 1983 and Cherie in 1988 validate this point.

But who could ever forget Desperate Lover, a rocksteady smasher for Studio One in the late 1960s?

How do you feel when your baby is gone

You toss and turn you cry all night

Andy's ability to write brilliant love songs came from his early life and, according to him, was born out of not having the love of a mother or father, which triggered the sentiments expressed in the song.

The songwriter's revolutionary songs, all of which he wrote, and which were headed by probably his best-known recording I've Got To Go Back Home that became Jamaica's most popular musical anthem, along with others like Fire Burning, Unchained and Check It Out will be expanded on in Part 2 of this article next week.

Though only Fire Burning and Check It Out were not on Bob Andy's Songbook album, it is ironic that the singer did not make an album at Studio One.

He recorded 12 singles there that were included on Songbook.

The album Songbook is on record as being one of, if not, the best-selling album out of that establishment. Other notable cuts from Songbook were Too Experienced, Life Could Be A Symphony and I'm Going Home.

Interestingly, with all the popularity these songs enjoyed, his recording of Games People Play for Federal Records, was his first release, though it was recorded after.