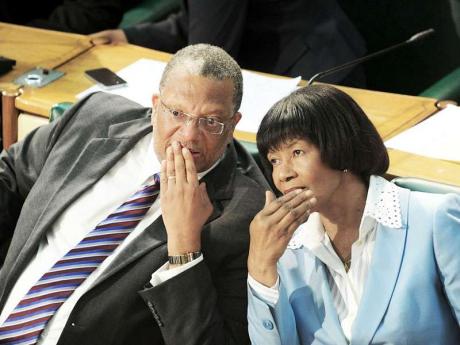 You can't call the game at half-time. If you did that with the just-concluded Budget Debate (political football?) in Parliament, you would have been wrong. Audley Shaw and Andrew Holness had put in an impressive first-half performance - but that only bolstered the Portia-Peter team for a devastating and deadly second half.

The Jamaica Labour Party (JLP) had an effective game plan which was masterfully executed: Audley would play to the power-elite gallery mesmerised by talk of fiscal prudence, fiscal discipline and fiscal consolidation, while young Andrew would energetically go after Portia with her well-honed branding as the poor people's champion.

Both overreached. Andrew exercised lamentably poor judgement by not excising these words from his otherwise finely crafted and polemically effective speech: "The people gave you power because they believed you would protect them and make life better for them. Madam Prime Minister ... you never really wanted to help. All you wanted was power."

The first law of effective propaganda is that it must have some measure of credibility. Not even Portia Simpson Miller's harshest and most mean-spirited critic would believe in his heart of hearts that her interest in, and devotion to the poor, is not genuine and wholehearted.

Portia, in her opening salvo, was simple but poignantly straightforward: "Fortunately, Mr Speaker, no one can seriously question my love for the Jamaican people and my dedication to them. The people of Jamaica have not only heard my words but they know my heart. They know my deeds. They know that mine has been a life of unquestionable service. My record of commitment for ensuring that the interests of the people are protected stands as a testament."

The opposition leader should apologise to the prime minister. Not because of her office. But because he was so grossly and grievously unfair.

The prime minister herself was unfair to Andrew and his administration, accusing them of "reckless borrowing", chiding that "he (Audley Shaw) found a cheaper way to put the country into more and more debt". Peter Phillips was to continue that line, at one point being carried away in asserting, in contradiction of his own prime minister the day before, that the Jamaica Labour Party (JLP) Government had "doubled the debt" during its four years in office, prompting Audley to immediately correct him on a point of order.

This country faces a national crisis. We can't expend energy in polarising rhetoric, not to mention downright misrepresentations. We are where we are because all our administrations have racked up the debt. The prime minister herself acknowledged that "several aspects of the economic crisis were outside the control of any administration", but apparently could not resist the temptation to engage in histrionics.

When the Bruce Golding administration was hit with the Great Recession of 2008, the worst in more than 70 years, knocking out our bauxite sector and $16.5 billion in revenue up to May last year; and when his administration was faced with a US$2.7-billion loss in export earnings and a domestic economic downturn which pulled $5.7 billion from his GCT revenues, what could the then JLP administration have done but to borrow?

Except, as Portia so eloquently and plaintively asked at her post-Budget press conference last Thursday, we were going to deprive hospitals of medicines and other supplies and stop basic food imports and perilously cut oil imports. It was not reckless borrowing to fill the hole created in our national Budget which was no fault of the political administration, but to the greed of capitalists in the developed world. We do a disservice to ourselves as a people when in our crass political war games, we demonise one another while giving a pass to external actors who do, believe it or not, play a part in our sorry predicament today.

But hear me
out: It's no sense crying in our soup. It's no sense wishing we had a
perfect world. And the sooner we come out of this denial and face our
harsh realities, the better. And this is where, in my view, Peter
Phillips was masterful and formidable last Wednesday as he closed the
Budget Debate. Peter delivered a first-class presentation, surgically
and systematically taking apart his critics and their arguments. His
thesis was compellingly simple: Whatever our ideological fantasies - of
the Left or the Right - we are left with an inconvenient reality: Nobody
is going to lend us any more money unless we signal that we will pay
down the debt and take tough decisions.

I hear a lot
of talk about whether this Budget has anything for growth; whether it
will spur private-sector investment or attract foreign investments;
whether it is sufficiently protective of the poor and vulnerable, etc.
Hey, guys, the patient is bleeding all over; he is about to die; let us
not spend time now discussing whether he should be driving a BMW, living
in Norbrook or saving for his retirement. Let us try to get him to the
hospital so we can save his life! Then we can discuss his future. If he
does not have his life, he can't use it to achieve any of the goals we
are arguing is best for him. It's the same with our
economy.

I have no confidence in the neoliberal
Washington Consensus view of the International Monetary Fund, the World
Bank and the international capital markets. I know the pro-cyclical
measures they favour won't work for us. But arguing that at this stage
is sophistry. Phillips said it plainly from his opening of this Budget
Debate: If the creditors are not satisfied by the signals from this
Budget, "Shop lock!" You not getting a cent!

So if we want to craft a Budget that
suits the consumers, the public-sector workers, the unemployed,
lumpenproletariat, hoteliers, book industry, Big Business, generally,
and small-business people, that's fine. Go ahead. Don't raise any taxes.
Satisfy everyone.

But be prepared to cut public
services so drastically that life would be unbearable - no, you don't
know what is unbearable yet if you feel what exists now is unbearable.
Ideally, there should be a compensatory financing facility for countries
like Jamaica, whose living standards have plunged and where poverty
doubled because of a global recession not of our making. (The PNP's
argument about the doubling of poverty under the JLP is the kind of
disingenuous argumentation that does the national dialogue no good.)
Hundreds of millions were thrown on the rubbish heap of unemployment and
in dire poverty and trillions of US dollars in GDP lost globally
because of this wasteful recession caused by casino capitalism. Ideally,
we should be compensated and we should have debt relief - if we had a
just international economic system.

But it's no use
wishing we had. Those who are critical of this Budget must come up with
credible, practicable alternatives. Phillips meticulously showed that
alternatives proffered were woefully lacking.

He even
had to displease his friends in the Private Sector Working Group (PSWG)
by showing that their prescriptions were unrealistic in our context. The
PSWG's net revenue gain would be $7.5 billion when the gap in the
Budget left a deviation of $43 billion. Their recommendation for a
reduced GCT of 12.5 per cent means that the Government would have to
impose an additional $12.8 billion in taxes. And it was Portia's
pro-poor advocacy which turned some of the National Housing Trust
surplus to the poor, rather than use it in the way suggested by the
PSWG.

If the Government had included even more goods
on the non-exempt list (and had not backtracked on some already
announced), there would be even more suffering among the poor and we
would risk social unrest - to a greater extent than we do now. And, of
course, Phillips showed that Shaw's recommendation of a 10 per cent GCT
reduction - requiring a revenue loss of $24 billion - would be the
height of irresponsibility. "Mouth mek fi chat" indeed, as Phillips
dismissed that fantasy. It's time we face reality, as harsh as it
is.

But what about what we tax? Sure, we can move
things around. I like the finance minister's firmness with the powerful
tourism lobby; accepting their compromise but insisting he would not
relent from the amount he sought to extract from that sector, so
accustomed to getting its way. He demonstrated admirable courage.
(Though, of course, he benefited from the internecine struggle in the
power elite between traditional manufacturing/trading/commercial
capitalists and those in the hotel industry.) Property taxes could have
been raised, but I suspect the Government would have a harder time
collecting that as easily as it could taxes on some basic goods and on
electricity. The IMF knows that too.

Not much wiggle
room

Those who ask why the Government could not find
other areas to tax and leave basic foods don't understand that IMF
ideology frowns on all these tax-exempt areas. No wonder in its Article
IV consultation note last Thursday it informed that it's "directors
welcomed the authorities (the Government's) progress in developing a
comprehensive economic programme." It "stressed that strong commitment
to decisive implementation of the programme ... will be
essential".

The IMF wants even more adjustment. It
says, "Most directors encouraged the authorities to consider
greater exchange-rate flexibility as part of a comprehensive policy
package." This means devaluation of the dollar, which would
further push up prices.

Phillips, last Wednesday,
proved decisively that there was, indeed, a breach of trust between the
former regime and the IMF, quoting, devastatingly, from the IMF itself
to prove that and for the first time enumerating the specific breaches.
Peter Phillips went for Audley's jugular on
Wednesday.

Portia pulled off what she could for the
poor with her welcome announcements and Peter showed that he has played
deftly the hand he has been dealt. It is up to others to show a more
credible creditors' budget.

Ian Boyne, a veteran
journalist, is the 2010-11 winner of the Morris Cargill Award for
Opinion Journalism. Email feedback to columns@gleanerjm.com and
ianboyne1@yahoo.com.