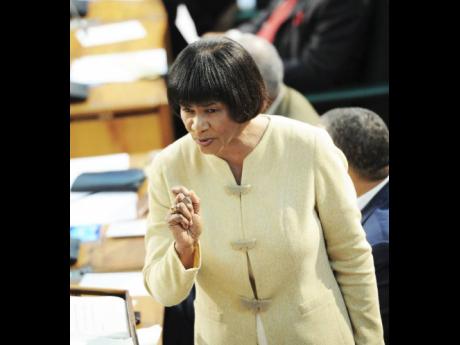 Common sense must always prevail: in politics, in life, with an acute sensitivity to the distress of the poor, unemployed and working. The mothers who have to 'catch man' so as to provide their children with money to go to school three days a week. The men ageing, unemployed and inflicted with life-threatening ailments, forced to beg money to see a specialist or buy medicines.

These and so many other indignities should have steered the Government away from inflicting a bruising and debilitating tax increase on poor people, most of whom voted for a change from the hopelessness they saw under the previous administration after only one term served.

What were Peter and Portia thinking? To say this administration was forced to act in such an insensitive manner because of the conditions left by the former administration is misleading. And to apply such austere measures in order to comply with international lenders, led by the IMF, while not providing some ray of hope via an economic stimulus package, is even further compounding the problems faced by the country, and preparing voters to put little faith in the politics of the day.

The faltering American economy was on the brink of failing in 2008 had President Barack Obama and his economic advisers not provided economic stimuli to the financial and automotive sectors, which outraged the opposition who claimed it was 'anti-capitalism', 'anti-the American way'. Today these sectors are sound, profitable, saving millions of jobs.

The United States would not be in the position of world leader today if President Franklin D. Roosevelt did not, with his Democratic Party, impose the New Deal, considered 'socialism' by the opposition, to save the American economy from the Great Depression of 1929. He summarised his action as a "use of the authority of government as an organised form of self-help for all classes and groups and sections of our country". Germany and Japan would not have risen to become great economic powers if the United States did not impose the Marshall Plan to rebuild their economies after they lost World War II.

The Develop Jamaica Initiative (DJI) that I presented to the Government under Prime Minister P.J. Patterson's leadership is an economic stimulus plan. Its intentions are to provide employment, economic growth, hope, while reining in spending on the wrong things such as importing too many luxury items that satisfy very few who can afford them.

The Government's position to the Initiative was that the country was in dire financial predicament and "could not take on anymore debt". My response then - and now - is that Government continues borrowing to pay debt and will be in a continuous, weakened position if it stays this course. Austere economic policies and tax reforms cannot, by themselves, get Jamaica out of its stagnancy, high unemployment and crime rates, with other accompanying serious social maladies.

Jamaica, as I have written in many articles, has enormous global brand recognition, great respect for its cultural and social offerings, and solid goodwill around the world. There are many non-Jamaicans willing to offer their expertise and resources to a growth-oriented nation.

The Initiative should impact every corner of Jamaica, capturing world attention and support. It is my firm belief, having for 46 years examined and written on Jamaica's social, economic and cultural challenges and accomplishments, and participating in business in the US and Jamaica, that it represents the best way forward for Jamaica, within a socio-economic context. It provides hope.

The Initiative, in its entirety, recommends that the Government:

1. Secures financing of US$200 million, to be raised through bond issues, inclusive of diaspora bonds, international grant-aid financing and soft loans from the International Monetary Fund, World Bank, the Inter-American Development Bank and a consortium of international commercial banks. The capital raised is to be used solely for financing targeted developmental projects presented by entrepreneurs, established businesses and new entities that have convincing proposals that show growth for the Jamaican economy. Investments and loans should not exceed US$6 million to any company. Provide an operating budget not exceeding US$5 million per annum to administer the Initiative.

2. Establish an executive committee, a public-private sector partnership, to set policy and oversee the Initiative, chaired by the prime minister and/or minister of development, with one representative from each government ministry; and one representative each from the Opposition, Jamaica Manufacturers' Association, Jamaica Exporters' Association, Jamaica Chamber of Commerce, Jamaica Agricultural Society, small Business Association of Jamaica, Jamaica 4-H Clubs, Scientific Research Council, Jamaica Bankers' Association, the Private Sector Organisation of Jamaica, Small, medium and micro business enterprise, the University of the West Indies and the University of Technology. The committee is to meet once per month. Projects to be undertaken by the DJI must have a two-thirds majority vote of the committee.

This body would meet annually over two days in Jamaica, chaired by the prime minister, and attended by the minister of finance and planning, and the executive director/development czar.

4. Establish a manage-ment/administrative body headed by an executive director/development czar, supported by a staff. This position should be held by someone with vast business/industrial experience, experience working with the political system, and an unbending commitment and passion to transform Jamaica. The responsibilities of this body will be to vet the companies and projects to be funded by the DJI, recommend their selections to the DJI executive committee for final approval, and then guide the management of those chosen, towards profitability.

5. Assemble a database of managers, marketing executives, lawyers, accountants, engineers, technicians, and executive assistants to be placed, when required, as consultants or temporary staff in companies provided with financing by the DJI. This expertise to be drawn heavily from the diaspora.

6. Launch the DJI, inviting entrepreneurs and companies to present project proposals. Promote the Initiative globally through a website.

7. Financing should be made primarily, but not exclusive to, targeted industries. Sectors targeted should be agriculture/agro-industry (fishing, food processing, nutraceuticals, essential oils), the entertainment industry (music, film and television, live performances,) tourism (emphasis on attractions and the rebirth of Kingston as a prime destination), alternative energy, information and communication technology, mining, fashion, furniture, craft, health care, childcare, and sports. Emphasis is to be placed on research and development.

9. The prime minister, in the capacity of chairman of the DJI, and the executive director/development czar will appear before Parliament once or twice per year, if so requested, to make a report on the operations of the DJI.

Targets must be set

Jamaica possesses the human capital, ambition and intellect to achieve First World status in 20 years. However, this requires leadership, the will, and consensus that growth and development are the main objectives, with a clear message sent to all. Targets must be set, for example, to grow the economy by six per cent over the next two years, and sustain and advance this growth path.

Jamaica needs bold and sensitive leadership, not averse to making decisive and innovative steps to advance the country. I believe Prime Minister Portia Simpson Miller and Finance Minister Dr Peter Phillips, with the strong supporting cast of Cabinet ministers and junior ministers, are capable of seizing the moment, and learn from past missteps.

The earlier announced Budget is one such misstep, but there are signs of the Simpson Miller administration moving in the right direction: seriously exploring the offering of diaspora bonds to help finance the country's needs, appointing people to statutory boards who have criticised them, and quickly responding positively to the lament of the Jamaican people to the tax increases.

But more is needed, like ridding the nation of partisanship, cronyism, egomania, laziness, political expediency, bad-mindedness and being thin-skinned.

Julian 'Jingles' Reynolds is a writer, filmmaker and entrepreneur. His novel, 'A Reason For Living', will be published this fall. Email feedback to columns@gleanerjm.com and fiwipro@yahoo.com.