The PNP's budget is P's budget 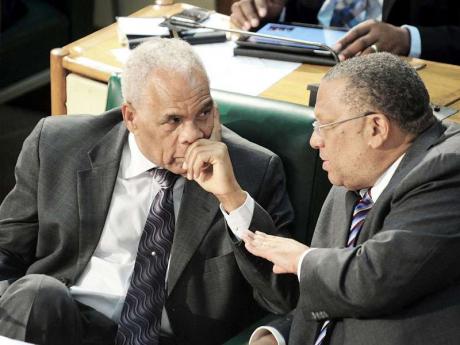 If one could put one's mouth, heart and foot where one's pocket was, one would be some sort of contortionist or gymnast. However, if one puts people first in other places apart from the beginning of a party name, truly, it could be said that one loves the poor. We must think of them first and then plan and not consult them as afterthoughts.

The People's National Party (PNP) drove into Parliament in a JEEP full of oranges. It took a route taking care to avoid the eucalyptus and castor oil which was promised by the Jamaica Labour Party (JLP), which seemed hell-bent on making its sojourn in power be cut short by a year.

As my grandmother used to say, "Tickya," when you hear politicians, talk, because they are first interested in politics, and development after. Dr Peter Phillips is not the most personable politician, and he doesn't seem particularly interested in popularity either. He is a pragmatist who does what he feels is to be done. This same Minister Phillips did what he felt was right in his own opinion; not in the opinion of then Prime Minister P.J. Patterson, nor the then minister of justice or attorney general.

This Peter, whose name means 'rock' in Latin, has more than a passing resemblance with regard to his solidity, stature and defiance against the tide. Phillips, one will recall, never seemed to recover from the surprise beating in the 2006 PNP presidential election when, swelling with confidence, he was inexplicably pipped in the final phase of voting by a resurgent Sista P. With suggestions in some quarters that it was not a true defeat but a mysterious 'Blything' of his chances, his aspiration and perspiration for the ultimate leadership of the party, and thus the country, never abated.

Thus, as his avoirdupois increased, he launched another challenge for the presidency. Despite even the Labourites thinking it being a bad move, he false-started again in 2008 and was placed in two back benches; no longer a shadow minister and no longer vice-president.

In 2009, when the Labourite government tried to fiddle with the Budget, there were attempts to place general consumption tax (GCT) on basic food items and educational material, among other austerity measures. Then Finance Minister Audley Shaw perhaps created the prologue for his demise, because he had stated a year earlier that the imminent global economic crisis was not likely to have a severe impact on this country.

Nonetheless, a strident 'pauperphile', Portia, jumped on the issue, showing little affinity to feral creatures, and rightly criticised the Government.

Then, in late 2011 as the election campaign started to 'tun up di ting and show dem di fis', a promise was made to remove GCT from electricity bills. Dismissing it as cheap 'politricks', Shaw revealed that GCT is only applicable to a small minority of high-level domestic consumers. Therefore, contrary to the idea of it being a pro-poor suggestion, it would translate into giving a benefit to the upper classes and not the most impoverished.

Whatever might have been the dubious economic rationale in the election promise, it might have been predicated on the assumption that most of us do not read the 'light bill' in any detail. This includes the lazy middle class, who can actually read, as well as the almost 20 per cent of the population whose eyes are 'dark'. In this country, illiteracy is worse than innumeracy, because the average person who can't recognise his name on a bulla can show a fist and make the V sign. He can also read the numbers, including the capital 10 and upper case six on his bill.

Such a person, who tends to occur more frequently in the constituency of the prime minister and finance minister than in most of the other 61, might not be the sort of person who reads a book or election manifesto. Nevertheless, since poor people know the value of education far more than they are credited for, any increase in the price of books is a stab in their stomach. Most persons in her constituency, who share her background, will not get the break she did.

Alas, when Phillips delivered, it was a mixture of eucalyptus, castor oil, senna pod and mojo herb, because inasmuch as we knew that hard times were ahead, this is not what the PNP campaigners fought for, and was suspected of being Phillips' initiative. Shockingly, GCT was plugged into electricity bills, short-circuiting the pre-election promise of Portia and crew. Then, as if he read from the Shaw Chronicles - and Shaw himself suggested so - he disconnected the original commitment of the PNP in Opposition by doing the complete opposite.

And like the Labourites, he glued and pasted GCT on books. He also outlined a litany of goods which now attract GCT - and surprisingly among these are basic food items which the poor treat as their staple. A strange anomaly exists in that there is tax on fish but not on chicken, making seafood distributors cry 'fowl'. Moreover, the healthier 'swimmers' have a more positive impact on health and obesity, in particular. Therefore, it might be argued that the Government wants the populace to be fat, unhealthy and dunce.

The cries of the people

In comes Portia a week later, inasmuch as she sat in tacit approval beside him as he spoke, declaring that she "heard the cries of the people" and felt their pain. From on to the off position, the light switch was reversed and Portia now declared a commitment to keep GCT off electricity.

Of course, one wonders, if the people were not crying before, and given her close connection she has to them, why didn't she know that they hurt so much? Or is it the case that, as some elements suspect, it is Peter's independent budget, done like a secret document. If that is the case, it is a no-win situation because it means that Peter is a maverick and that she is really not running the country herself.

However, if she was party to the original Budget with, as Michael Manley said, "collective responsibility", she is totally accountable for the criticism about some of the heartless decisions Phillips announced.

Nevertheless, her presentation was a good one, if one filters out the unnecessary political grandstanding, because it demonstrated a comprehensive awareness of the overall macroeconomic picture and social prerequisites. Even if one wants to argue that the ideas she presented are not hers, she posited them well and convincingly. She gets thumbs up for the provision of additional housing units and housing grants, which have been a hallmark of PNP governments.

In reducing some interest rates for National Housing Trust (NHT) loans and increased benefits for public-sector workers, she is spot on. Then the concessions regarding hotel workers earning $10,000 or less per week to make them pay less NHT contribution might be small, but 'every mickle mek a muckle'. Furthermore, it makes mighty amounts of political muckle.

Add to that her announcements regarding infrastructure projects, such as a new leg of Highway 2000, the Kingston Container Terminal, land administration, and to cap it off, the commitment to review the National Minimum Wage, and she was prime ministerial.

Eventually, as Phillips took the mic again last Wednesday, there was a JLP-esque recanting from the original position of a week earlier. "We have heard and we are prepared to listen." Well, better late than never. Now, GCT is to be removed from animal feed and raw foodstuff, along with other changes. And private book merchants may now sell government-approved textbooks tax free. Thanks for this, but the real impact of reading has to do with the books which are outside the official curriculum.

Still, the presentations give me the impression of a Government that is thinking on its feet and suggest that finally they are consulting and working together. Hopefully, next time they do it before the presentations.