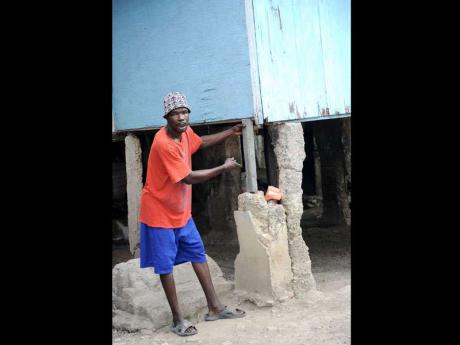 Forty-four-year-old Kevon Russell shows how he has to add a piece of board to help support his home at the sugar barracks. - Photos by Ian Allen/Photographer 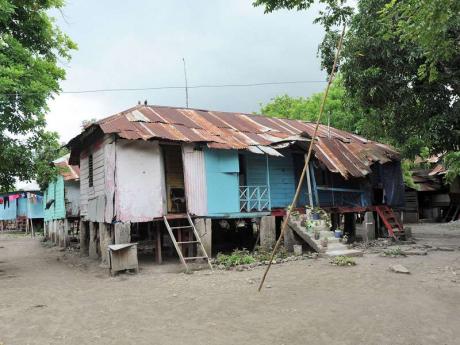 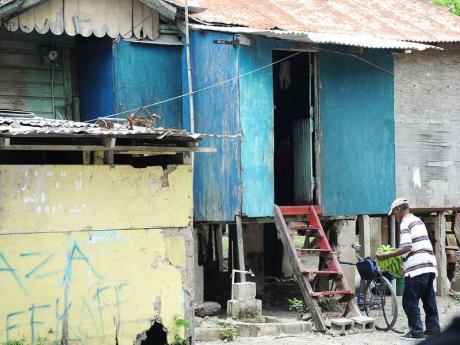 If life is spared, and Prime Minister Portia Simpson Miller has her way, 80-year-old Isaac Gilbert Peckoo, the oldest resident of the Golden Grove sugar barracks in St Thomas, will soon be relocated to a new home.

Peckoo has been living in the sugar barracks since 1939 when he moved with his parents who worked with the St Thomas Sugar Estate.

Like him, there are several generations of families that have seen good and bad times over many decades, while ekeing out a life in the dilapidated environment.

To the residents of Golden Grove sugar barracks, last Tuesday's proclamation by Simpson Miller that new houses will be built for sugar workers, as well as the promised relocation, was another in a series of similar pronouncements they have heard over the years.

"For some 20-odd years, I have been hearing that we will be relocated. Everybody come and tell us that, but I am yet to see it," said Peckoo.

"If it come it come, but I'm not looking for it. In a next 10 years, we here same way. Maybe I will be dead by the time them really do it."

During her Budget presentation, Simpson Miller revealed that the Government would be spending more than $1 billion to relocate eight sugar barracks in St Thomas, Clarendon, Westmoreland and Trelawny.

Golden Grove, in St Thomas, is one of those.

Falling under the Sugar Transformation Programme, the investment would also include upgrading of sporting facilities and executing critical small community infrastructural projects.

The approximate 200 residents living in the estimated 50 barracks have mixed views as to whether they would embrace the move if it does materialise.

Many would embrace it with open arms once the new location is suitable with proper infrastructure. Others have a strong resistance.

They are all baffled that such a public announcement was made, yet no one has met with them to provide details on the plans.

"How can a public announcement be made about us and no one has said anything to us?" asked 21-year-old Danisha Lewis.

"We are ready to move anytime, but someone must come say something to us. They must tell us what the plan is, where is the location, what infrastructure will be in place, when will it happen, what type of houses, what are the opportunities, especially for us young people who want to further our education, who want training and employment."

"Relocation good for me because me a drown out here!" countered 44-year-old Kevon Russell.

"When them carry we go a back bush, how we a guh hustle fi survive. We deh right out here on the main road and can do a thing fi eat a food. Nothing cyan gwaan way round deso inna bush. We a guh dead fi hungry round deh!" one Rastaman declared.

"But we a guh get pretty scheme," one lady noted.

"Me nah talk 'bout pretty scheme, me a talk 'bout survival. When me deh a pretty scheme and a dead fi hungry and can't survive, how that a guh help feed mi family and pay di light and water bill. Me wha get somewey yuh nuh, but it depends on where," the Rastaman hit back.

"With this barrack style of living with four people living on one building, it is not suitable for families. With the move, everybody would have their own plot and own house," said 66-year-old Daniel Grey.

No problem with site

Seventy-year-old Augustus Knight said he had been taken to the proposed alternative site and he had no problem with it.

"Is a nice place. If Golden Grove people don't want that location, they don't want anything," declared a very serious Knight.

"Some a dem house yah so old and weak that if breeze blow too hard, yuh in trouble," noted 69-year-old Stanley Thompson.

He isn't far off with that one.

Believed to be constructed more than 100 years ago, the Golden Grove sugar barracks were built for workers to utilise during the crop season.

Erected on stilts, each board barrack was built with four bedrooms and one kitchen, with one worker per room.

Today, however, in some instances, one family has taken over one of the four-room barracks, while in other cases several families share one barrack.

With not much done to improve the barracks over the years and with a history of extensive flooding, the structures have significantly weakened and are very dilapidated and possibly unsafe. Not to mention the unsightly state.

Flooding has been a major problem for the community. During the rainy or hurricane season, there is almost a certainty that they will be flooded out.

The neglected overgrown bushy canal behind the barracks causes the water to rise, which inundates the district. This is made worse because the mouths of the Plantain Garden and Dam Dam rivers are nearby.

"You can't even try repair or build nothing. As you try, water wreck everything," said Danisha.

Grey said whatever the Government is planning, it needs to give the residents a timeline and act now.

"Me nuh believe say it a guh happen. From long time me a hear tha story deh. Wid di crisis the country inna now, whey them fi find the money from," said 46-year-old Joan Morris, who was born there seeing her grandparents working on the sugar estate.

Now living there with her five children, she worked for the Eastern Banana Company for more than 12 years before it closed down.

"Yuh know say a the first me a guh believe it because it a come straight from the prime minister mouth. She say she find the money," shared 23-year-old Tamra Watson.

For 32-year-old Raymond Jennings, getting adequate land space at the new location to continue his livelihood is critical.

He depends on farming to take care of his wife and six children - raising goats and chicken as well as growing plantains.

In the meantime, Dr Fenton Ferguson, member of parliament for East St Thomas, told The Sunday Gleaner that the proposed site for the relocation is the Phase II project of Stokes Hall in Duckenfield, but he could not give a timeline at this stage.

"We had attempted about 15 years ago to do something under Operation PRIDE, but there was a resistance coming from the residents.

"Now they have identified some additional lands that they will use under the Sugar Transformation Programme," said Ferguson.

"This will have a significant impact because in the past, they have suffered from flooding, among other issues. With the relocation and with proper infrastructure and so on, I think it will be a progressive move."

He added that although historic in nature, the barracks are an eyesore. "In fact, every time they try to do a little work, it's like if you pull a little area, the whole house comes down," he said.

Ferguson, who has been the MP for the area for 19 years, also noted that based on Golden Grove's historic significance, a decision is yet to be made if it will be declared a heritage site.