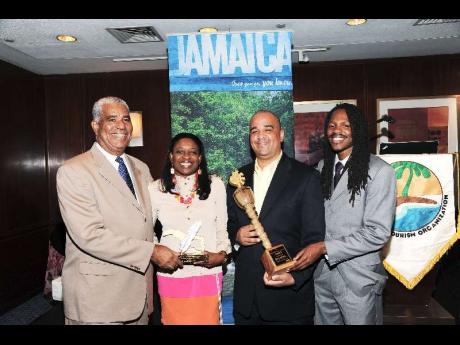 The Gleaner's Janet Silvera (second left) accepts the Marcia Vickery-Wallace award from Director of Tourism John Lynch (left) and Minister of State in the Ministry of Tourism and Entertainment Damion Crawford (right). Bevan Springer (second right), recipient of the Marcella Martinez award for Journalism, shares in the occasion. - Contributed

Noted tourism and hospitality journalist, Janet Silvera of The Gleaner has become the first Jamaican to win the prestigious Marcia Vickery-Wallace Memorial Award for excellence in travel journalism.

The award is given to a journalist who is following in the footsteps of the late Vickery-Wallace who was the former editor of Brides Magazine.

This is not the first time that Silvera is being honoured for her work in tourism journalism.

In the summer of 2011, she was featured on Travel Channel International's 'It's a Woman's World', a new series that immerses viewers into the lives of interesting and inspiring women who live and work in some of the most fascinating places on Earth.

Eight years after being the coordinator for The Gleaner's Hospitality Jamaica, a bi-weekly publication, Silvera, who has spent the last 20 years dedicated to publishing and covering tourism-related events all over the world has won, what she believes, is one of the most prestigious awards in tourism as a journalist.

"I am honoured to cop this one and treasure this moment among the most satisfying of my career," said Silvera.

The senior journalist sees tourism as the lifeblood of many countries across the world, but it is particularly so for Jamaica and other nations in the Caribbean.

She noted that "the hospitality industry encapsulates the full spectrum of the Caribbean experience, merging economics, culture, food and entertainment".

More importantly though, Silvera thinks that "focusing on tourism journalism is so important because it shines a light which goes beyond the surface frills of sunshine, sea and sand, and makes investigative forays into the drivers of the industry, putting into context the social and economic pillars which underpin and depend on the sector".

And responding to the award, The Gleaner's editorial management commended Silvera.

Editor in Chief Garfield Grandison said the award signals that Silvera is one of the best journalists covering the tourism sector locally, regionally and internationally.