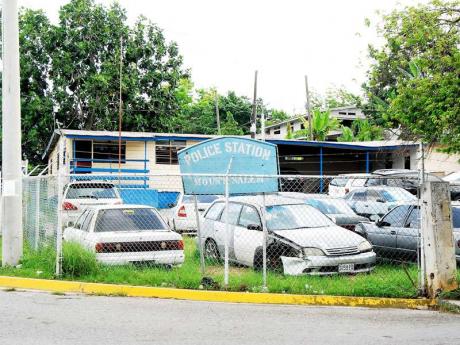 WESTERN BUREAU: The stench of corruption that continues to hang over the Mount Salem Police Station is staining the honest men and women working there and following them on to the streets of the St James communities they are tasked to serve and protect.

"The incident that saw the interdiction of the 18 policemen and women three years ago has left a bitter taste for the team of cops who now work," one policeman told The Sunday Gleaner.

"There is a stigma in the division that it is the outcasts and no-goods who are sent to Mount Salem to work. The burden is so heavy plus the resources for work are not the best," he added

The incident that has left a stain on the station is the 2009 revelation that a fake cop, Courtney Grayson, carried out policing duties from Mount Salem for six months.

Grayson was subsequently arrested on charges of impersonating a policeman and illegal possession of property, including the badge number of a sergeant who was on suspension.

But he reportedly provided the Police High Command with information about police corruption at the station, especially allegations of involvement by the police personnel in the multimillion dollar lottery scam which was then blooming in St James.

At the time, the then Police Commissioner Rear Admiral Hardley Lewin, intimated that Grayson's information may have played a part in the interdiction of the 18 police officers who were assigned to the station. Lewin had also recommended that the facility be downgraded to a police post.

Today, three years later, 11 of the interdicted police have been reportedly reinstated; one died after a brief illness while the other six were dismissed from the service.

The six are reportedly appealing their dismissal while one has sought a judicial review.

But not much has changed about the perception that the Mount Salem Police Station is the centre of corrupt activities in the parish.

The 16 cops now stationed there, including three district constables and three detectives, are forced to carry the weight of Grayson's albatross.

"There has always been a stigma attached to the Mount Salem station. Remember that is where that policeman (Sergeant Grantley Waite) was allegedly beaten to death. There is nothing about that matter that is clear and how it was dealt with," added the ex-cop.

According to the cop: "There are persons who prefer to go out of parish to work than take up a transfer at Mount Salem because of the stigma. It's really depressing."

"There are hardworking men and women at the station who are almost afraid to carry out their work because all complaints made against them are taken as true and corruption related by superiors before an investigation is done."

The policeman added: "There is a directive of one arrest per cop per week and is luck if there is even one arrest from the station per week. Something needs to be done to address the demotivation among the staff."

But chaplain for the Area One Police Division, Reverend Courtney Walters, is unaware of this psychological pressure being experienced by the police station in Mount Salem.

"I don't know of any residual reaction from that incident. Of course, individual men and women will want counselling sessions but I do not detect that there is any adverse effect from that incident," stated Walters.

"There was a significant rotation of the personnel there and new leadership put in place. I have been in constant dialogue with the persons (directly) affected and I provide whatever support I can."