Spanish banks to get EU bailout 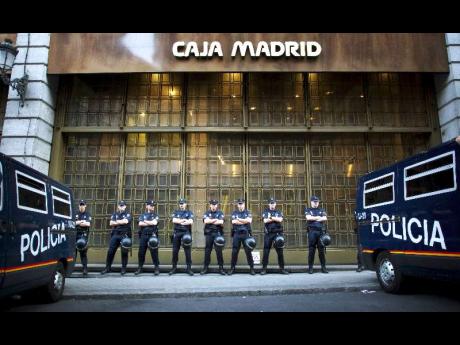 In this May 14 file photo, riot police stand guard in front of a branch of the recently nationalised Caja de Madrid/Bankia bank during a protest in Madrid, Spain. - AP

Europe is to offer Spain a bailout package of up to €100 billion ($125 billion) to help rescue the country's banks and keep the 17-country Eurozone from breaking apart.

After months of fierce denials, Spain admitted it would tap the fund as it moved faster than expected to stem the economic crisis that has ravaged Europe for two years.

Spain becomes the fourth - and largest - European economy to ask for help and its admission of help comes after months of market concern about its ability to pay its way.

In recent weeks, investors have demanded higher and higher costs to lend to Spain, and it became clear it would be just too expensive for the country to borrow the money necessary for a bank rescue from the markets.

The three countries that have received rescues thus far - Greece, Ireland and Portugal - are fairly small, and many have worried that bailing out much-larger Spain could call the entire euro project into question. Cyprus, also a small economy, could also be forced to seek a bailout soon.

Economy Minister Luis de Guindos said yesterday the aid will go to the banking sector only and so would not come with new austerity conditions attached for the economy in general - conditions that have been an integral part of previous bailouts to Portugal, Ireland and Greece.

A statement from the finance ministers of the 17 countries that use the euro explained that the money would be fed directly into a fund Spain set up to recapitalise its banks, but underscored that the Spanish government is ultimately responsible for the loan.

Still, that plan allows Spain to avoid making the onerous commitments that Greece, Ireland and Portugal were forced to when they sought their rescues. Instead, the Eurogroup statement said that it expected Spain's banking sector to implement reforms and that Spain would be held to its previous commitments to reform its labour market and manage its deficit.

The exact figure of the bailout, however, has not yet been decided. De Guindos said the country is waiting until independent audits of the country's banking sector have been carried out before asking for a specific amount. The audits are expected on June 21 at the latest.

The Spanish acceptance of aid for its banks is a big embarrassment for Prime Minister Mariano Rajoy, who insisted just 10 days ago that the banking sector would not need a bailout. For him and officials of his government, that had become something of a mantra. He was elected in November and walked right into a hurricane.