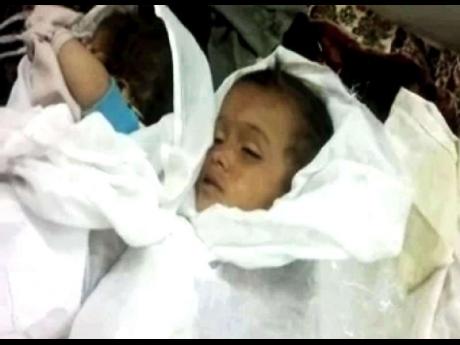 Sham News Network shows what it says are bodies of Syrian children in Mazraat al-Qubair on the outskirts of Hama. - AP

And in Damascus, residents spoke about a night of shooting and explosions in the worst violence Syria's capital has seen since the uprising against President Bashar al-Assad's regime began 15 months ago.

The nearly 12 hours of fighting in Damascus suggested a new boldness among armed rebels, who previously kept a low profile in the capital.

It also showed a willingness by the regime to unleash in the capital the sort of elevated force against restive neighbourhoods it has used to crush opponents elsewhere.

For the first time in the uprising, witnesses said, regime tanks opened fire in the city's streets, with shells slamming into residential buildings.

The latest escalation's in different parts of Syria are another blow to international envoy Kofi Annan's peace plan, which aims to end the country's bloodletting. Annan brokered a ceasefire that went into effect on April 12 but has since been violated nearly every day thereafter and never properly took hold.

Yesterday, United Nations (UN) observers in the country ostensibly to monitor the ceasefire issued the first independent video images from the scene of a reported massacre last week in a remote farming village.

Activists say up to 78 people, including women and children, were shot, hacked and burned to death in Mazraat al-Qubair last Wednesday.

The video, taken in the UN visit a day earlier, showed blood splashed on a wall pockmarked with bullet holes and soaking a nearby mattress.

A shell punched through one wall of a house. Another home was burnt on the inside with dried blood splashed on floors.

One man wearing a red-and-white checked scarf to cover his face pointed at a 2008 calendar adorning a wall, bearing the photo of a lightly bearded, handsome man. "This is the martyr," the resident, sobbing.

He sat on the floor, amid strewn colourful blankets, heaving with tears. It was not immediately clear if he was a resident of the village or related to the man in the photograph.

"They killed children," said another unidentified resident. "My brother, his wife and their seven children, the oldest was in the sixth grade. They burnt down his house."

After the observers' visit, UN spokeswoman Sausan Ghosheh said the scene held evidence of a "horrific crime" and that the team could smell the stench of burned corpses and saw body parts strewn around the now deserted village, once home to about 160 people.