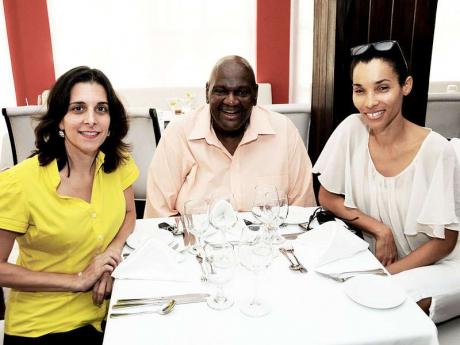 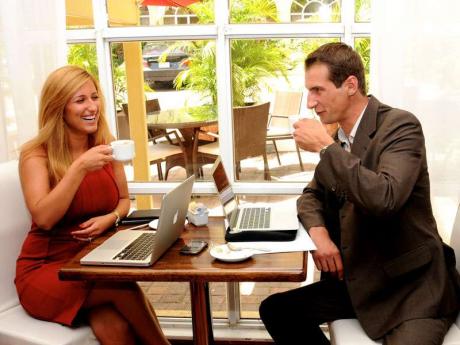 Luvs, Kingston is fashionable once again and then some, and the new landmark leading the renaissance is the very upscale and welcoming Spanish Court Hotel, located smack in the centre of the banking and commercial district of the nation's capital at 1 St Lucia Avenue (across from the British High Commission).

Indeed, not since the Myrtle Bank Hotel, in the 1940s, dubbed the Cross Roads of the Caribbean at the time, has Kingston seen such a grand hotel. And when we say grand, we are not talking about a façade of pretentiousness here. We are talking the very essence of grandeur, as in haute style and elegance of the fabulous order, packaged in a contemporary mode, but underpinned by old-world sophistication and charm.

The Spanish Court Hotel is the first major hotel to be built in Kingston in more than 40 years, and as is implied by its name, embraces Spanish-period architecture, with 107 elegantly styled rooms - all styled for traditional comfort and boasting all modern technological amenities, yet infused with the warmth and unique hospitable atmosphere, partial to its staffers, that makes for a culture of graciousness, punctuated by personalised service and attention to detail!

Built by real estate and property developer Christopher Issa, the Spanish Court Hotel was constructed on the site of the old upscale and very fashionable Spanish Court Boutique Shopping Plaza that once dominated Kingston's nightlife, housing as it did, the city's leading nightclub, and restaurants, for many a year.

Indeed, since opening its doors, the hotel has captured not just the eyes and interests of the travelling public, it has established itself as Kingston's leading hotel, earning rave reviews from satisfied guests, and travel experts nationally and internationally. Indeed, the Spanish Court Hotel is not only the preferred hotel of Jamaicans, including members of the diaspora, and the international travelling public.

Dears, we are talking the social and power hang here, as the city's fab and chic set, preferring to eschew the noise and intrusive glare of the nouvelle crowd, have quietly made the Spanish Court Hotel Kingston's main social artery for those in the know!

And little wonder indeed that despite being a city hotel, it has added the charm and appeal of the north coast resorts by welcoming guests with a cold or hot handtowel upon their arrival, followed by a welcoming cocktail - and we are talking a perfectly chilled mimosa, a glass of 'bubbly', or for the teetotaller, or those simply abstaining, a libation of choice!

Well, my daahlings, a few weekends ago, this here scribe, instead of heading for the north coast as is the custom, opted to have a weekend getaway here in the capital city. Naturally, the hotel of choice for this weekend getaway was the Spanish Court Hotel, and luvs, talk about a simply fabulous experience. Honeys, this was it!

Well, my dears, talk about a right royal treat! And that's probably the very best mode to describe the Kingston weekend getaway at the city's finest hotel.

Dears, as one enters the lobby, or the Rojo Restaurant or the very fashionable and oh-so-cosy Café with its air-conditioned interiors or its outdoor alfresco, courtyard appeal, the Spanish Court Hotel, communicates uber style and comfort of the First-World order, and nothing but!

We are talking South Beach deco, with island pizzazz, combined to produce a sense of fabulous dare that both envelops and welcomes with a sense of the familiar that silently screams high glam and creature comfort that is both pleasing and reassuring. The walls boast bold colours. The lounge and armchairs, a mix of faux animal print, sky-blue prints and whites, complete le mystique!

Indeed, the Spanish Court is now Kingston's best-kept world secret, as upon a visit to the Café or Rojo Restaurant, guests will be thrown in a cosmopolitan mix, as the world meets at the Spanish Court, and in the fabulous hallways, lounges, or sky bar, the languages of the world freely contend. And so it is, with the introduction of the Spanish Court Hotel to Kingston, world charm and civility are back and in a fabulous way.

Luvs, there is nothing like the feeling of being absolutely and totally pampered, and ensconced in a junior suite, with a view of the Blue Mountains, iPad at hand as the hotel's Wi-Fi service kicks in, Saturday morning in Kingston never looked or felt so good!

And then there was the full-body massage in the hotel's Zen Spa. Late dinner in the Rojo Restaurant, followed by Sunday morning breakfast, and lunch in the the Café, where the strawberry cheesecake is worth its weight in gold; and to cap it off, spend a lazy Sunday afternoon in the Hotel's sky-deck infinity pool.

Dears, it was like that - a simply fab weekend getaway in the heart of the city! The Spanish Court Hotel proved an absolutely fabulous oasis of culinary refinement, esoteric leisure, almost self-effacing grandeur that makes for a truly fabulous life!

Indeed, as the Spanish Court approaches its third year of operation, it can be truly said that Kingston's finest hotel is also its smartest!