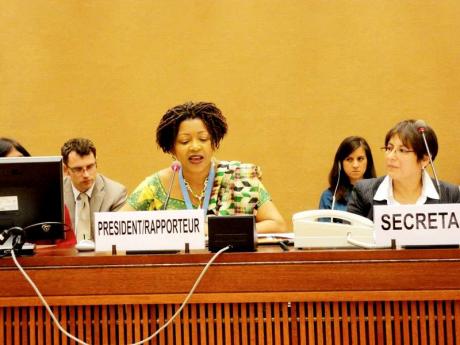 Professor Verene Shepherd, chair of the Working Group of Experts on People of African Descent, at the first meeting in Geneva, Switzerland, recently. - Contributed

Determined to bring change to discrimination against people of African descent, the University of the West Indies (UWI), Mona's Professor Verene Shepherd has been named chair of the Working Group of Experts on People of African Descent (WGPAD) by the United Nations.

Shepherd was selected from among more than 200 people vying for the position.

Her portfolio falls under the auspices of the Office of the Commissioner for Human Rights in Geneva, Switzerland, where she chaired her first meeting in April.

"It is wrong to discriminate against a person solely on the basis of ethnicity," she argues, as she fights a battle that highlights the cake-cutting incident in Sweden, which saw that country's Minister of Culture Lena Adelsohn Liljeroth come under fire after cutting a slice of cake out of the genitals of a racist characterisation of an African woman; the Trayvon Martin case in Florida; and, again in Sweden, the college freshmen who had a mock slave auction at a party.

"We meet with representatives of states where these atrocities take place," Shepherd tells Outlook.

Her second trip in her new post will take her to the United Kingdom (UK) later this year. The UK, like the rest of Europe, has been plagued with accusations of discrimination against minorities over the years.

"While there (in the UK), we will meet with blacks and present a report at the next session of the working group," said the UWI professor.

According to her, the state usually says one thing, and when they go on the ground, it's another.

Racism is widespread across Europe, she notes. From the cases the commissioner of human rights had seen, Shepherd says, it is sometimes hidden.

"Because Europe is embracing multiculturalism, they hide behind that because that does not allow you to highlight the peculiar problems that affect any people in particular."

She added: "In addition, funding to NGOs (non-profit organisations) and the groups that look about blacks is being cut."

Eyeing the Caribbean as one of the regions to focus on during her two-year tenure, Professor Shepherd says, "We in the region believe there is no problem of racism because the majority of the people here are of African descent, but this is not the case at all".

Her team will also visit Canada in the coming year.

The WGPAD operates within the United Nations system and is tasked with strengthening the promotion and protection of human rights around the globe, as well as addressing situations of human-rights violations and make recommendations.

The WGPAD is specifically mandated to examine the problems of racial discrimination faced by people of African descent, to collaborate with respective countries to devise policies aimed at eradicating racism, racial discrimination, xenophobia and intolerance; as well as to propose measures to ensure access to justice for all persons of African descent, says a release from the university.

Professor Shepherd is a director of the Institute for Gender and Development Studies at the UWI, Mona.