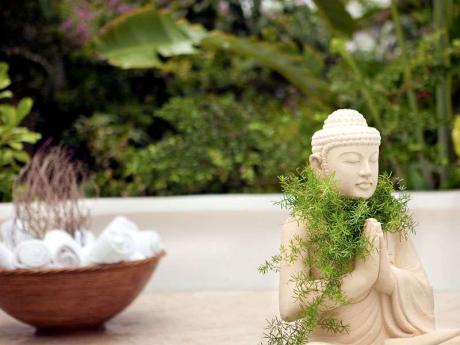 A Buddha at a Couples spa. Health salons and spas are popular drawing cards for tourists.

Sometime during the 1980s, Jamaica was treated to an enthralling documentary. It was about our mineral spas and featured a German professor of geology. He was in Jamaica surveying our mineral spas and identified more than 60. His conclusion: "Jamaica is sitting on a gold mine."

The documentary also featured an array of impressive testimonials. Mr Harold Smith of then Smith's Garage on Orange Street, Kingston, spoke of being cured of arthritis after visits to the Milk River spa in Clarendon. Perhaps most impressive, though, was one by an American woman. She had received surgery in New York for a back injury. The doctors informed her that she might never walk again. However, a Jamaican colleague at her workplace encouraged her to go to the Milk River spa in Clarendon, Jamaica.

The woman related how she withdrew all her savings, packed her bag and headed to Jamaica - in her wheelchair, of course. After a few months at the spa, she began to walk again.

Upon her return to the United States, she paid a visit to the hospital where the surgery was performed. She encountered a number of nurses on the ward where she had stayed. They recognised her but there was much consternation. Were they witnessing an apparition? Were they seeing a ghost - duppy, in Jamaican parlance? The woman explained how she laughed, reassured the nurses, then shared her experience with them.

A few years ago, a German couple - quite ironically - was seen at Milk River. It was their 37th visit to the facility.

We have been, personally, fascinated by this phenomenon known as the Milk River spa since the 1970s. A family member suffered a back injury in the United Kingdom and only received permanent relief after visiting Milk River. Another relative injured a shoulder in a fall in the United States. The doctors recommended surgery but the Milk River option was selected and it worked.

A Clarendon citizen, Mrs Juanita Smith, said she regained her sight after visits to Milk River. The claims and the claimants are so disparate that one would have difficulty denying their authenticity.

The stories are manifold and sceptics may abound. However, when someone is able to lift an arm above the head for the first time in months, only after spending a few days at Milk River, that is another matter.

Although the focus has been on Milk River, there are other well-known spas such as Salt Spring, also in Clarendon, Bath in St Thomas, another in Middle Quarters, St Elizabeth, one in St Ann, and myriad others.

What we can say about Milk River from personal experience is that it is no ordinary spa. It is a healing stream. The world should be told the full story and let them be the judge!

We should move away from the anecdotal and vague terms - such as 'claimed' - to empirical accounts of the modern-day miracles experienced by real people who have visited these healing streams and walked away having been miraculously cured! For example, our relative could provide accounts of her fall; the medical practitioners who attended to her before and after her visits to Milk River. This information could then be checked and corroborated with these doctors.

Scores of cases fall into that category and should be investigated, documented and form a part of a positive and deliberate strategy to tap into these most valuable assets. The Jamaica National Heritage Trust is quoted as stating: "Like the other mineral spas, Rockfort is believed to have healing properties." Is there information available to nudge us into a more positive and proactive posture? Yes, there is!

Experiences with our mineral spas may vary. There is, however, an overwhelming body of information that confirms the authenticity of the curative properties of these springs.

We are indeed sitting on a huge fortune while earning and accepting the sobriquet 'poor'. We should initiate bold steps to develop and market these miraculous healing streams to the world. That includes millions of our own people, here and abroad.

The world is waiting. Spa Finder, reputedly the world's largest travel wholesaler of spas, reports world trends in 2004 as follows: "Spas will become the primary consideration for many travelers.

"In recent years, the fastest growing segment of the hospitality industry was hotels with spas. Indications are that spas with hotels will become an even bigger factor in consumer travelling decisions. Rather than being an 'amenity' offered at hotels or resorts, spas will be the deciding factor or the primary draw." There we have it, ladies and gentlemen of Jamaica!

Our spas are undoubtedly a most important natural resource. There exists the potential to save the country billions of dollars annually in patient care alone - surgeries, medication, hospital accommodation and the like.

Concomitantly, we stand to earn billions from people flocking to our shores to take advantage of this remarkably unique product which offers so much. How then can we mobilise and tap into this huge gold mine known as our mineral spas - but which are, perhaps, more accurately - our untapped 'oil wells'.

The authors are both management consultants and may be contacted at columns@gleanerjamaica.com.