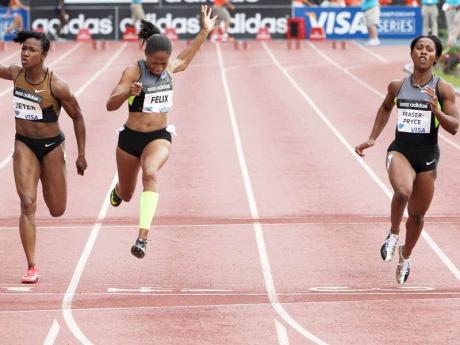 Tyson Gay also made a triumphant return to competition by also winning at the adidas Grand Prix. The 29-year-old Gay hadn't raced since hip surgery last July. He entered the 'B' 100, finishing in 10.00 seconds running into a headwind, as he won comfortably ahead of Jamaicans Kemar Bailey Cole and Jason Young, who both clocked 10.30 seconds for second and third, respectively.

For Gay, success wasn't measured in numbers. He accomplished his goals: to sprint without pain and to "get all the jitters out".

Blake and countrywoman Shelly-Ann Fraser-Pryce, the defending Olympic gold medallists in the 100, face their own stress heading into the Jamaica trials. The country is so deep in the sprints, a berth at the London Games is hardly assured for either. Both were encouraged by their performances yesterday.

Blake was hampered by his customary slow start, but ran down Keston Bledman to stay undefeated this year.

''You have the confidence going into trials that you're invincible,'' Blake said of his unbeaten streak.

Even if he was a bit disappointed by the close call.

Fraser-Pryce made a statement against a deep field, winning in a season's best 10.92. American Tianna Madison was second in a personal-best 10.97.

Reigning world champion Carmelita Jeter was third in 11.05 and US teammate Allyson Felix, a three-time 200 World champ who is considering adding the 100 at trials, was fourth in 11.07. Trinidad and Tobago's Kelly-Ann Baptiste was fifth in 11.07, while Jamaica's Schillonie Calvert placed seventh in 11.25.

"It was about getting everything right before national championships," Fraser-Pryce said.

Sanya Richards-Ross may have earned herself a second event at US trials, winning the 200 in a world-leading and personal-best 22.09. The 2009 World champion in the 400, Richards-Ross was trying to convince her coach to let her run the 200, too.

Bianca Knight, 22.46, was second ahead of fellow American Mikele Barber, 22.96, while Jamaica's Samantha Henry-Robinson was fourth in a season best 23.04 seconds.

The men's 200 was narrowly won by Churandy Martina of the Netherland Antilles in 19.94 seconds, the same time credited to Jamaica's Nickel Ashmeade, who eased up in the last five metres only to be surprised by the fast-finishing Martina. Jamaica's Warren Weir was third in a personal best 20.08, while Marvin Anderson took fourth in 20.21. Another Jamaican, Rasheed Dwyer, was sixth in 20.66, while Mario Forsythe did not start.

The 800 World champion, David Rudisha, came into the meet saying he wanted to run a time in the 1:42 range - which would have been an impressive feat two months before the Olympics considering his World record is 1:41.01.

The Kenyan proved just how dominant he is in the event, bettering his goal by running 1:41.74 to win by nearly three seconds.

"I felt good during the race and I decided to push a little bit," he said.

The US' Francena McCrory won the women's 400 in 50.06 seconds, narrowly beating Jamaica's Novlene Williams-Mills (50.10) to the finish line. Rosemarie Whyte ran a season best 50.62 for third ahead of Britain's Christine Ohuruogu (50.69), while Patricia Hall was eighth in 51.63.

Dwight Thomas fell after hitting the final hurdle in the men's 110 metres obstacle event,which was won by the United States' Jason Richardson in 13.18 seconds ahead of countryman Jeff Porter, who clocked 13.26.