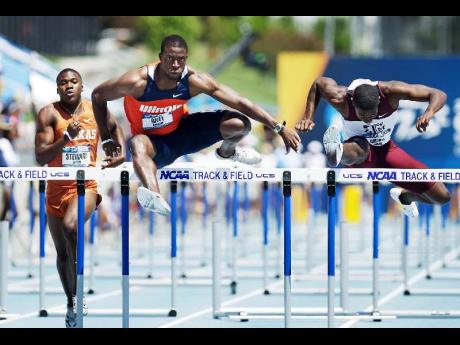 WORLD CHAMPIONSHIPS representative, Andrew Riley, ended his collegiate career on a high as on yesterday's final day of competition of the NCAA Division 1 Outdoor Track and Field Championships on the campus of Drake University in Iowa he captured the men's 110 metres hurdles in 13.53 seconds, running into a negative wind of 3.5 metres per second.

Victory marked a historic moment for the University of Illinois senior, following his win in the men's 100 metres on Friday's third day of the Championships.

He became the first athlete ever in the male division at these Championships to win both the 100 metres and 110 metres hurdles at the same meet.

It was the second time Riley was winning the sprint hurdles, following victory in 2010 and in winning this time, he sort of made up for his second place finish last year.

KC old boy at the back

Former Kingston College hurdler, Keiron Stewart, finished at the back of the field in 14.08 seconds after having problems during the race.

"I got the victory today and I am very happy and I am very pleased to know that I am the first to achieve this feat, which many have tried to do in the past," said Riley in a post race interview.

Several other Jamaicans were also involved in relay action yesterday.

In the men's 4x400 metres, former St Jago High quarter-miler, Riker Hylton, ran the anchor leg for Louisiana State University (LSU), which placed third in 3:01.21. The University of Florida won in a world-leading 3:00.02.

In the female 4x400m, former St. Andrew High athlete, Latoya Mc Dermoth, who ran the opening leg and former St Jago High runner, Jonique Day who ran the anchor leg, piloted their team to a close second in 3:24.59. Day, who at one stage held the lead for her team, was pipped on the line by Phyllis Francis of Oregon, which won in 3:24.54.

It was, however, bitter sweet moment for the Jamaicans as their team won the overall female team title over the University of Oregon.