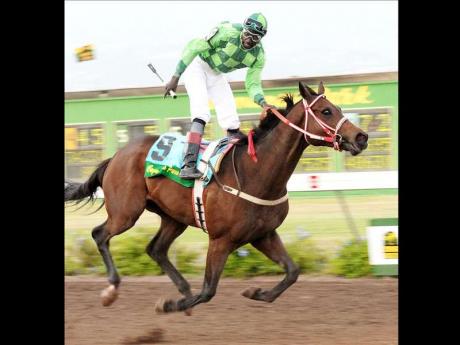 Jockey Shane Ellis stands tall in the saddle while celebrating a runaway victory aboard TYPEWRITER in the $9 million Jamaica Derby for native-bred three-year-olds, run for the Sir John Mordecai Trophy, over 2400 metres, at Caymanas Park yesterday. - Colin Hamilton/Freelance Photographer

TYPEWRITER, running as the 7-2 third favourite with former champion Shane Ellis, riding for big-race trainer Spencer Chung, overcame a setback in his preparation to win the 92nd running of the Jamaica Derby over 2400 metres at Caymanas Park yesterday to be unbeaten in four starts.

It was the first Derby winner for Chung, and he was elated with this particular training feat due to challenges to present his charge sound enough to deliver.

The gelding had disappeared from the exercise track a week prior to the race and was training at sea, according to the trainer.

"I only had two months and three races to prepare him," said Chung of TYPEWRITER, who was unraced as a two-year-old and only made his debut on Easter Monday when scoring by a wide margin over 1100 metres in maiden company.

"We just made it in time for the race and I am happy that things turned out positively," he added.

Ellis said: "This is an exceptional horse. He gives you more than you expect and I am happy to be associated with him."

The first half of the race was fiercely contested by the battling leaders PRINCE ANDREW (33-1), TIMEFORARMS (44-1) and Oaks winner EXOTIC GOLD (3-1) under leading jockey Dane Nelson in a maximum field of 16 native bred three-year-olds.

During all of this, TYPEWRITER bided his time on the bridle in fourth until going past the leader PRINCE ANDREW approaching the 1000-metre point of the course.

With the well-backed AVENTURA (5-1) under leading all-time jockey Winston Griffiths and UNCLE DONNY not far adrift passing the half mile, TYPEWRITER cruised into the final bend some three lengths clear of both, after which the issue was never in doubt.

Shown the right hand stick after turning for home, TYPEWRITER effortlessly lengthened his strides to win on a canter, easing down, leaving ALL CORRECT, running on, and the grey UNCLE DONNY to fight it out for second. AVENTURA finished fourth.

Meanwhile, Dane Nelson emerged the day's leading rider with three winners, including a dead heat in the third race. He won aboard REMEMBER ME, a dead heat with GOLD RUNNER. He also landed victory with CRUISER in the second race and ANTOINETTE in the eighth.

Apprentice Robert Hallendeen rode two winners on a day when form players held their own. He booted home STORMY CAT in the sixth before returning to land SANKOFA in the ninth.