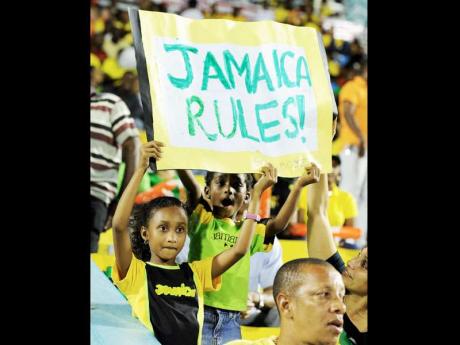 The sign held by these kids standing in the grandstand says it all about the Jamaica vs Guatemala World Cup Qualifying football match they were watching at the National Stadium on Friday night. Jamaica won 2-1. - Ricardo Makyn/Staff Photographer 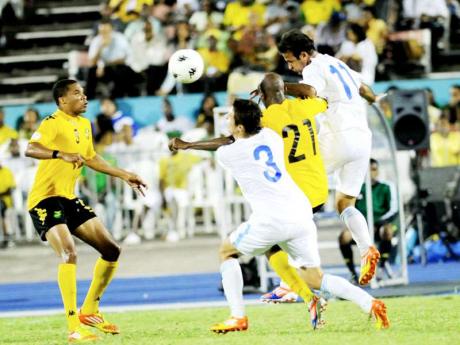 Unlike many other Jamaicans, the county's senior men's football team head coach, Theodore Whitmore, was not surprised by the Reggae Boyz commanding win over Guatemala in their opening-round match in the semi-final stage of the CONCACAF World Cup Qualifying (WCQ) on Friday night inside the National Stadium.

The country was a bit nervous ahead of the Boyz opening Group A match against the Central Americans, after the team had suffered back-to-back losses against Panama: 1-0 at the National Stadium on Sunday, May 27, and 2-1 in Panama City on Friday, June 1.

After a slightly tense start, goals in either half from Demar Phillips (41st) and Ryan Johnson (46th) helped Jamaica to a dominating 2-1 win, with Guatemala undeservingly notching a 90+2 minute consolation goal through second-half substitute Dwight Pezzarossi.

"Tonight's performance was no surprise; I have been saying it all week from we came back from Panama, that the vibes and everything was right," Whitmore shared at the post-match press conference.

"Our first World Cup Qualifying game and we started off on a positive note, the way how we wanted to start off, but there was a little bit of complacency in the last part and we conceded a goal," he added.

The team was subjected to boos at half-time and again at the end of the game during the May 27, meeting with Panama at 'The Office' and Whitmore had a message for the detractors.

"I think it was a very positive start tonight (Friday) and with a little bit more trust in the team I think we have a far way to go."

What turned out to be a convincing win for Jamaica did not always appear to be heading in that direction as it was a rather cagey first half, with the Boyz seeming to be still smarting from the two defeats leading up to the match.

The team's nerves was settled, however, when Phillips scored his third goal - in two meetings against Guatemala - four minutes before half-time, as his 25-yard shot bounced over the diving Guatemalan keeper Ricardo Jerez.

"The game was played in accordance with how we wanted it in the first half because the opponent did not have many chances at goal in the first half up to the 40th minute," Guatemala's head coach Ever Hugo Almeida shared.

The goal combined with whatever was said by the coaching staff at half-time appeared to have made an impression on the Reggae Boyz, as they re-emerged a transformed unit. The Jamaicans were oozing confidence and started playing with a great deal of flair, which paid immediate dividends as after some wonderful work on the left side of the pitch, Luton Shelton found Johnson in the middle. Johnson, who was surrounded by defenders, showed great composure to slot home neatly.

The goal effectively killed the game off as a contest, as the Boyz were well on their way to their 10th victory over Guatemala in 13 meetings.

"Luton and Ryan have been working well all week, so that was the choice and it paid off tonight," Whitmore stated. "We set out to win the game and we won, and it was very important with the fact that we are playing at home. We wanted to get maximum points and that we did tonight," he added.

Jamaica will next play away to Antigua and Barbuda on Tuesday. The Antiguans lost 3-1 to the United States in the group's other match, on Friday night also, in Florida.

"No team in this World Cup Qualification is going to be easy, especially Antigua, because we know that it is a Caribbean rivalry," Whitmore expressed. "We expect a tough showing from the Antiguan team and we are up for the challenge and we are preparing for them as well," he added.