A lovely day at Melbourne Oval 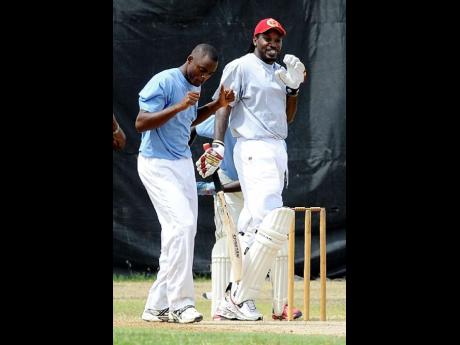 SATURDAY, June 2, was a day to remember, at least when it comes to cricket in Jamaica.

It was a day on which the Cricket Clubs Activities Committee (CCAC), formed to raise funds for the suffering cricket clubs in Jamaica, staged a festival-type fund-raising event, and with former players like Courtney Walsh, Darren Powell, Nehemiah Perry, Wayne Lewis, and Delroy Morgan around, it brought back memories of yesterday.

On the other hand, with present players like star-boy Chris Gayle, Dwayne Bravo, Sulieman Benn, Carlton Baugh Jr, André Russell, Tamar Lambert and Andrew Richardson in action, the event reminded of what cricket can be like in Jamaica today.

It was, for everybody on the ground, a lovely day, not because of top-class or competitive cricket, but because of exciting cricket.

Powell, who played in both the Fifteen15 match between a Masters XI and a Celebrities XI, and an Invitational XI and an All Stars XI, enjoyed himself, slamming many sixes and many fours after opening the innings for the Masters XI.

The big attraction, however, was Gayle, and the big man really entertained the gathering, cracking a number of sixes, one of them, in the first over from Powell, a flick over the mid-wicket boundary on to the roof of the clubhouse, and three of them in one over from Richardson, two over long-on, one over long-off.

When he was dismissed, or rather, when he got out, playing quietly, almost defensively forward and was caught on the extra-cover boundary, a hush descended on Melbourne Oval.

It was almost as if the match had suddenly and unfortunately ended.

That was until André Creary joined Kennar Lewis.

A result is not usually important in a match of that nature, but on that Saturday afternoon it seemed that everything depended on winning, at least it seemed so based on the urgency of Creary and Lewis of the International team and by all members of the All Star team minus Gayle who, by then, had left for Antigua and a meeting with two prime ministers and members of the West Indies Cricket Board.

Creary and Lewis almost turned Melbourne Oval into a disaster zone as cricket balls flew high and far, into the adjoining premises, off the back-foot and off the front-foot, over long-on, long-off, extra-cover and cover, off pace bowling and off spin bowling, including off the bowling of left-arm spinner Benn.

Lewis was good, but Creary was better. He hit the ball sweetly, confidently and with ease.

That Saturday at Melbourne Oval was a wonderful day. It brought back memories of the annual Milo/Melbourne Festival of blessed memory.

For 26 years, up to 2004, the Milo/Melbourne Festival paraded the best from Jamaica and brought the best to Jamaica.

The Milo/Melbourne Festival brought together past West Indies greats, stars of the day and future stars so that Jamaicans could roll back the years with those of yesteryear, could revel in the glory of those still playing and get a look at some of those to come, those waiting in the wings.

There were others also, those who, like Wasim Raja of Pakistan, Aravinda de Silva of Sri Lanka and Vinod Kambli of India, missed the action for reasons beyond their control.

The CCAC event, however, is a good idea. Cricket, local cricket, needs it and with more stars, bigger stars and bigger crowds, it could and should become in time an annual event, a truly successful annual event.

All Jamaica, all cricket-loving fans in Jamaica, should say a hearty congratulations to chairman Wavell Hinds, to committee members Ashermen Forbes, Larry Crichton, Jhanelle Davis, Andrew Richardson, Simon Jackson, Michael Hylton, Ransford Evans and David Bernard Jr and to all who contributed to making it a reality.

It was good to see players like Gayle, Bravo, Benn, Powell and Walsh playing; also others like Morgan and Wayne Lewis. It was good to hear that Ramnaresh Sarwan and Kieron Pollard, who were invited but could not make it, along with Gayle and Bravo, contributed financially to the effort and it was good to see all the businesses, big and small, involved as sponsors, including Supreme Ventures.

More important, however, it was good to see people in Jamaica at cricket again without it being Test cricket. Even if it was cricket for fun, even if the action was not all that serious, except while Creary and Lewis were batting, and even if the committee almost ran out of white balls because of Powell, Gayle, Creary and Lewis, it was also good to see people, men and women, boys and girls, once again enjoying themselves at cricket.