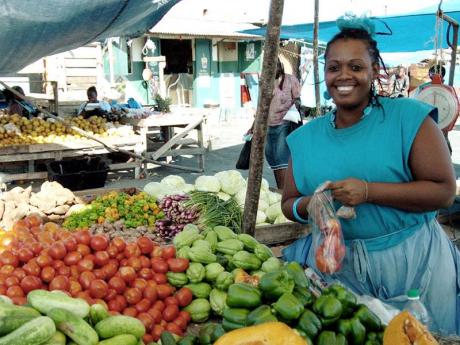 In this 2009 photograph, Phillipa Holness is all smiles at her stall where she sells an assortment of vegetables and other raw foodstuff. - FILE

Jamaica has, thus far, been spared the financial devastation that has visited many larger and more developed countries because of the recent worldwide recession. Therefore, whereas I fully appreciate the need to generate more tax revenue, I considered the very idea of taxing farm products as being a backward step that could well contribute to economic and health ruin.

Not only would the selective imposition of GCT on raw farm produce sold in supermarkets be unfair to supermarket shoppers, supermarket operators and the farmers that supply them, it also seemed to me that the Fair Trading Commission would have something to say about a government policy that would single out one group for taxes and exempt another group (sometimes as near as a few steps away) from taxes for the very same products.

A few years ago, a patient of mine migrated because she was disgusted with the inequity that she suffered. Her pastry shop was constantly targeted by revenue agents while vendors directly in front of her establishment were totally ignored by the system. The selective taxing of farm produce sold in supermarkets would amount to the same thing.

Already, our farmers are trying to survive on an unlevel playing field (within an unfair system). They must be competitive with cheaper imported farm goods that are produced with far less cost for fertilisers, machinery, energy and transport. Some of our imported raw foods are subsidised by the exporting nation.

Many farmers are also plagued by what I call the 4 Ps - pests, praedial larceny, poor water supply and appalling parochial roads to move their goods to the marketplace.

Before news broke of the tax rollback, a distressed operator of one major supermarket chain lamented the confusion surrounding the intended new taxes on farm produce. Exasperated, he eventually suggested that, if there were to be any attempt at taxing any farm produce, the Jamaican Government should only impose the GCT on imported farm products. I believe that this should still be considered.

Somebody or some group of advisers rushed into a decision that lacked deep thought and long-term planning for the overall development and health of our nation. Aside from the manifest unfairness of such a skewed system, it should have been obvious that several farm products are already perceived as 'luxury items' by many, especially supermarket shoppers, and not everyone can trek to a market. Because vegetables are expensive, people, and especially providers of the popular 'box lunches', laden their meals with relatively cheap high-glycaemic index starches like white rice and white flour products.

Like many other countries, Jamaica is already reeling from an 'epidemic' of increased body fat, diabetes and hypertension. The non-communicable (so-called, lifestyle) diseases are a major strain on our overburdened health system and struggling economy. People who attempt to eat low-glycaemic, high-fibre foods are effectively penalised for their efforts.

Non-communicable diseases are exploding in developing countries. And, commenting on the World Health Organisation World Health Statistics 2012 report on the health status of Caribbean nationals, Director General Margaret Chan said, "This report is further evidence of the dramatic increase in the conditions that trigger heart disease and other chronic illnesses, particularly in low- and middle-income countries" (The Gleaner, Friday, May 18, 2012).

We should be seeking to reduce the cost of healthy foods. The mere consideration of taxing them is sending the wrong message.