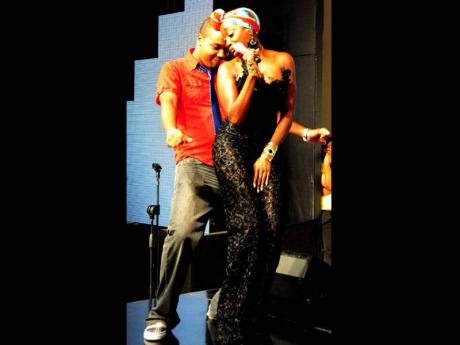 Estelle invites a member of the audience to join her onstage during her performance at Pulse Caribbean Fashionweek, fashion shows, held at the National Indoor Sports Centre on Saturday night. Winston Sill/Freelance Photographer 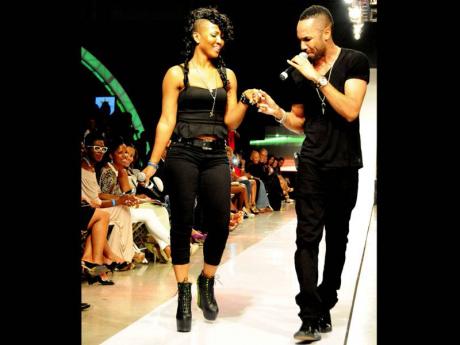 O (left) and her husband Cham take the catwalk together during their performance at CFW on Saturday night.
1
2

Artiste Baby Cham brought energy to the crowd on the second night of Caribbean Fashionweek (CFW).

The event, which took place at the National Indoor Sports Centre, was scheduled for a 7 p.m., start, but did not get under way until almost 8 p.m.

Cham delighted the audience with hits from his early catalogue including Ghetto Story, Babylon Boy and Vitamin S. These were a hit with the audience and had them dancing and singing along word for word.

Cham then announced, that because it was Fashionweek, he had to come prepared and looking his best. He then began to strike model-like poses much to the delight of the ladies.

This was followed by his more recent hits, among them, Stronger and That Way. It was however, when he called on his wife O, that the energy grew to fever pitch. The two performed songs such as Wine and Tun Up, which had the females singing and gyrating.

Earlier in the evening, the show kicked off with Haitian designer David Andre's collection. The collection titled 'Sea, Sex and Sand', lived up to its name. The line started with mostly white pieces. The barefoot models strutted their way down the runway in fashion forward pieces.

The House of Lamaica collection by Marvalyn Nelson impressed with its use of the Jamaican colours throughout the collection.

The Meiling collection was well received by the audience. Adding variety to the event, this was the only collection which featured a live performance from an artiste whilst the models strutted down the runway.

The Lee Annz Designz by Suzilee Chambers was also enjoyed by the audience. The ready-to-wear colourful resort wear pieces were fashion forward and trendy.

One of the most outstanding collections of the night was the Jae Jolly collection. The pieces were edgy and colourful.

The last segment of the show had collections that reflected the Jamaican culture.

The Mutamba collection was Rastafarian inspired. There were mostly black pieces, with splashes of red, green and gold. The audience was transfixed on the collection which seemed to resonate well with them.

The Olympic designs, which included podium and ceremony wear, will be worn by the entire team, including three-time Jamaican Olympic gold medallist Usain Bolt.

At the end of Cedella's collection there was yet another break to make way for international artiste Estelle. By this time however, most of the patrons were already making their way to the exits.

Estelle took to the stage and reeled off hits such as No Substitute Love and Come Over.

She also invited patrons onstage to dance with her while she covered Bob Marley's song Is This Love. Her hit single American Boy, was also a hit with the audience.