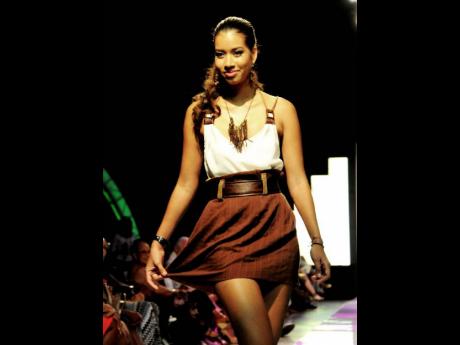 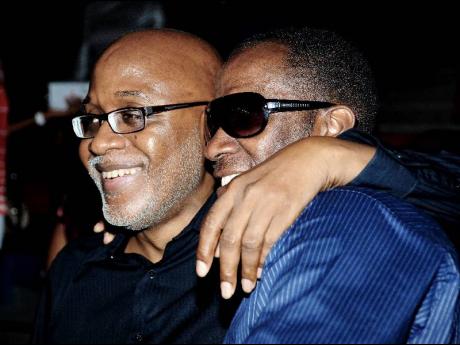 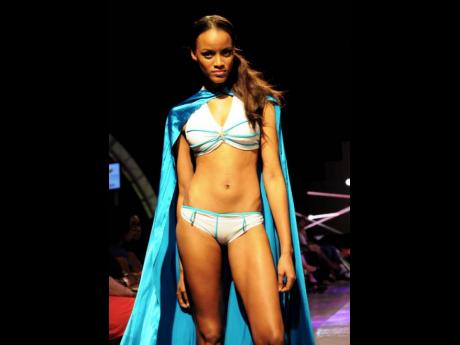 Here are one of the swimwears from Kazz Forbes, presented at Pulse Caribbean Fashionweek Fashion Shows, held at the National Indoor Sports Centre, Stadium Complex, on Friday night.
1
2
3

On a night of mostly average collections, it was entertainers Shurwayne Winchester and Konshens who brought the most energy to Caribbean Fashionweek that was held at the National Indoor Sports Centre, St Andrew, on Friday.

Taking the stage shortly after 11 p.m., Shurwayne got down to business with Don't Stop that was accompanied by his robotic dance moves. He then invaded the elevated Appleton Booth and had patrons singing along as he did renditions of Rihanna's Cheers and Cake.

"I'm going to touch on music for each and everyone of you," he said, before ordering patrons to stand up. After singing a few hip-hop and dancehall songs, he did Wine On It. He also formed a soca train with several females, before doing a few of his popular songs.

Unlike his predecessor, who had to ask the females to come onstage, Konshens was flocked by women on entry. He did songs like Bad Gyal, Pretty Devil and Bounce, while interacting with the patrons who had crowded the runway. After a short pause, he did Gyal A Bubble that led to quite a bit of dancing. When he did Stop Sign, he too had to come to a halt as three females danced on him. At midnight, with a dwindling audience, he continued to entertain with songs like Represent, Realest Song and Do Sumn, before bidding farewell.

One of the first collections for the night came from Kerry Kay by Kerry Christian, who showcased plus-sized outfits. Kahnami Creations by Morvia Reid-Williams utilised jute fabric. Although the cloth used was coarse, the designer used modern cuts for the dresses and jumpsuits that were made in bright and light-coloured cloth.

The second segment kicked off with the top-four contestants from Mission Catwalk, whose performance on the night will help to determine the winner of the contest. The first to show his line was Ryan Chang. He had a cohesive line that had predominantly earth tones and loose-fitting garments.

He was followed by Crystal Powell, who had pieces that were more structured. With some floral and a few interesting cuts down the line, there were a few misses among several hits. But one of her strongest pieces was a cream bathing suit and a cover-up that started the collection.

Rebecca Strim, who was reintroduced into the competition as a wild card, experimented with several types of fabrics and presented mostly flirty dresses.

Despite the fanfare and cheers before the beginning of Gregory Williams' HOD Designs, he did not live up to expectations although he went outside the box with his choice of fabrics and cuts.

Ne Sera by Kerin Scott had some decent pieces, but one of her standout pieces was a high-low jacket that was matched with thigh-high boots and shorts.

Later in the show, there were flirty bathing suits from Wild/Free by Raecine Williams, while Ajeante also did some beach wear, but added some dresses and shorts to the mix. Eye Q Optical, one of the sponsors, also showed off colourful and trendy frames.

Syiim by Juanita Reid gave the audience a taste of swimwear and cover-ups, while jewellery was shown by Amber World Museum. Olympia's Fashion by Olympi Small Sonaram displayed metallic-and-red bathing suits. This was followed by Diana Jordan by Diana Williamson, who showed accessories like purses, hats, earrings, bags and belts.

The final two designers for the night were Louise Graham with a collection of mainly white, and Drena Luna by Arlene Martin that had several maxi dresses, jumpsuits, pants and a few short dresses.