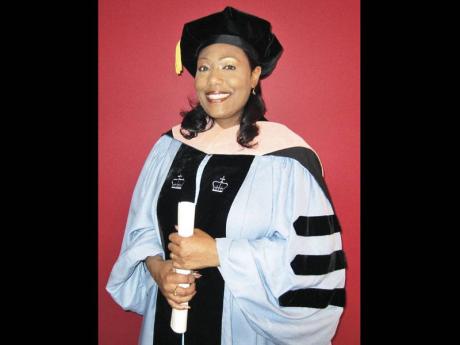 Dr Burrell-Piggott credits her success, in part, to her solid formative education in Jamaica. She attended Fay Simpson kindergarten, Immaculate Conception Preparatory School, and Immaculate Conception High School in Kingston. She then attended Howard University in Washington, DC, where she earned a bachelor of science degree (honours) in psychology. While a student at Howard, she received the Board of Trustees Scholarship and was consistently named on the Dean's List.

In 1996, she was a member of the contingent that represented Howard University at the Afro-German and African-American meetings held in Berlin, Germany. She returned to the US to share her viewpoint in a panel discussion held at the University of Massachusetts. In 1997, she was the recipient of the Lucy Moten Fellowship, which enabled her to study in France at the University of Paris-La Sorbonne. She was also inducted into Psi Chi, the National Honour Society in Psychology.

She continued her studies at Howard University, also earning a master's degree in psychology in 2000. Tiphani's master's thesis won her an honours medal and the Department Chair's Award for exceptional Master's Degree research.

Dr Burrell-Piggott's thesis was dedicated to her brother Tahj Burrell, who passed in 1999. After receiving her master's degree from Howard University, she worked with the Pan American Health Organization's Caribbean Epidemiology Center in Trinidad. Her research on HIV/STI epidemiology culminated in the presentation of research findings at the Conference of the Social History of Medicine and Public Health in the Caribbean.

In 2001, Dr Burrell-Piggott was accepted to study at the prestigious Yale University. While at Yale, she was a Yale graduate mentor and an editor of the Yale Journal of Health Policy, Law and Ethics. She was also the recipient of the Yale President's Public Service Fellowship and was awarded the Yale Fellowship for Diversity and Equal Opportunity. In 2002, she received the Caribbean American Intercultural Organization award for excellence.

In 2003, Dr Burrell-Piggott earned an MPH degree in global health. After completing her education at Yale, she served as a project director for a NYC health-care organisation.

Dr Burrell-Piggott is a sociomedical scientist working to reduce health-care disparities among disenfranchised populations, both in the Caribbean and on a global scale. She has advanced expertise in health-care project planning and implementation, quantitative and qualitative research methods, sexual and reproductive health and health-care policy. She has presented at various academic conferences and has published in several scientific journals. She has served in several capacities at Columbia University, New York University, and various health-care and development organisations in the US and the Caribbean. She currently resides in Maryland, US with her husband Dr Damani Piggott (an MD/PhD infectious diseases physician at Johns Hopkins Hospital) and their daughter, Zuri.