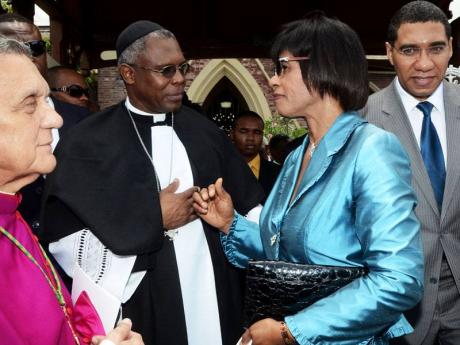 Father Howard Gregory, Anglican bishop of Jamaica and the Cayman Islands, says the nation runs the risk of bringing dishonour to the monarchy if the discussions about moving the country to a republic status take on a negative flavour.

Father Gregory, who was speaking at the St Andrew Parish Church in a service to celebrate the Diamond Jubilee of her Majesty Queen Elizabeth, yesterday urged that negativity must not highlight our evaluation of the system that the country has been a part of for the last 50 years.

"Today, our nation now finds itself at the crossroads as we seek to continue the historical process of self-identity and self-definition, which was consolidated in our attainment of Independence in 1962. Fifty years later, we now seek to take a further step by taking the inevitable step towards becoming a republic.

"I believe that in our zeal, we run the real risk of discrediting the monarchical system of governance which has brought us thus far. While we do so in a political culture, which is increasingly cynical and despairing of political leadership and governance, we need to be extremely careful that we do not evaluate the system which has brought us thus far with such negativity, if not impoliteness and ungraciousness."

Father Gregory, in his message, also paid special tribute to Her Majesty, adding that her reign has been marked with distinction.

"Having assumed the throne, which was thrust upon her by circumstances that were not of her making, ... she has brought to the monarchy ... singleness of purpose, dedication and sensitivity to her people, often a resounding theme in her Christmas messages and on the occasion of her visit to various nations. She has also brought a level of humanity and public engagement as much as the office has allowed as head of a royal household and of a realm," Gregory stated.