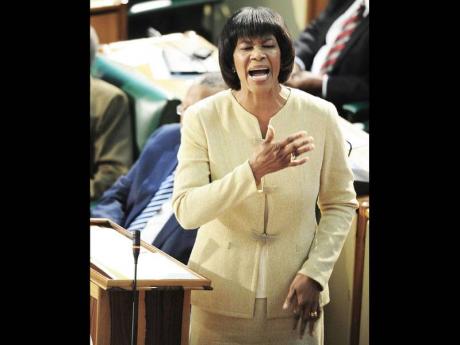 Prime Minister Portia Simpson Miller last Tuesday pointed to a 10-year-old girl who she said demonstrated an understanding of aspects of the economy. - Ricardo Makyn/Staff Photographer

Prime Minister Portia Simpson Miller has introduced the nation, although not by name or face, to a 10-year-old girl who appears to have a greater appreciation of the Government's decision to seek to haul in $19.4 billion in taxes than the average adult citizen.

"A 10-year-old girl sent me a message and she said, 'Go and make your presentation, but I am going to listen because I want you to remind the country that what they could not do for four years, you cannot do in five months."

The prime minister, who was making her Budget presentation in the House of Representatives on Tuesday, recognised the 10-year-old for her "understanding of aspects of the economy at such a young age".

The Gavel marvels at the brilliance of this youngster. Perhaps it's time to consider implementing a taxation module for GSAT because, without a doubt, Jamaica needs its citizens to be au fait with the operations of government and the role of taxation in the economy.

We believe the public debate on the recent tax package announced by Finance Minister Dr Peter Phillips has created the opportunity for all Jamaicans to engage in meaningful discourse on the state of the country's public finances. Simpson Miller's 10-year-old clearly understands, so the rest of us must get on board.

It is a given that no one likes to be taxed. No one wants to hear he is required to pay more for the services he consumes.

Without a doubt, the more educated Jamaicans are about the impact of taxation on particular sectors, the more likely we are to successfully contribute and influence taxation policies.

The most recent exercise in the Parliament has demonstrated the vast influence the business class had on tax measures imposed by Phillips. Indeed, business interests formed themselves into the Private Sector Working Group (PSWG) and were able to influence the direction of the Government's tax policies.

The success being reaped by the PSWG is a reflection of intense research on the possible effects of taxation on various sectors of the society. While its interest was clear, the research done by the PSWG allowed it to be so persuasive that policymakers were forced to take on board some of its suggestions.

If there is any lesson we can learn from the way in which the PSWG approached its task, it is the fact that with research, you are halfway up the curve. For too long our debate on taxes has tended to be that the measures are cruel, wicked and either anti-business or anti-poor.

We must lift the level of the discussion, and tertiary-level students and graduates have a responsibility to lead in this regard. It is a time for think tanks to be created which will focus on the effects of government policies. If more Jamaicans engage in such discussions and seek to participate in the governance process, it will redound to the benefit of our democracy.

But the matter of taxation goes way beyond who should pay and how much. A central issue is what happens to the money once it is collected.

The Gavelhas no doubt that Jamaicans will be more than willing to pay their fair share of taxes if they were getting good service from the Government.

Despite being burdened with billions in new taxes yearly, the quality of service paid for with tax dollars had not been at the level where Jamaicans feel comfortable. The vast majority of our roads are in a deplorable condition; the police force has been far from clinical and is riddled with corruption; the wheels of justice turn at the pace of a full stop; the education system has failed the majority of our people; and our health-care service has been on life support.

Jamaicans are less likely to resist tax packages whenever they are confident that their money is being properly spent.

This is precisely why we must insist that our Government take the necessary steps to reduce waste and operate an efficient public service. Similarly, concrete steps must be taken to reduce the country's debt and put the country on a growth path.

The Gavel is certain that Simpson Miller's 10-year-old understands such economic equations. And although our advice is unsolicited, we think the prime minister should consider inviting the child to lead the country's economic team if it fails to fix what the previous Government broke.

But as a starter, the Government should use that 10-year-old girl to do public lectures in village halls and town centres right across the country. The more Jamaicans understand the state of the economy, the greater the odds of having all hands on deck in restoring the economy. The speaker, though, must be credible.