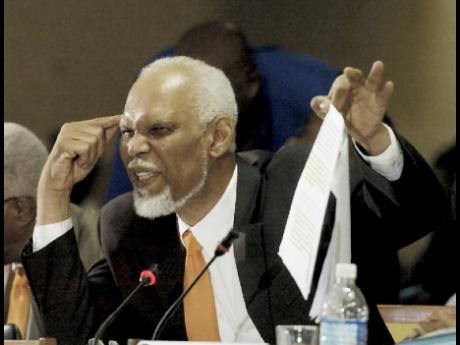 GOVERNMENT SENATOR K.D. Knight is suggesting the compulsory acquisition of idle properties as part of a development plan for urban areas.

Speaking in the Senate on Friday, Knight, who is chairman of the Urban Development Corporation, said the wise acquisition of certain parcels of lands is critical to countering urban decay.

"We have to use judiciously, the land acquisition powers and we also have to look at unused lands in areas like that without any discernible plan," Knight said.

He further suggested that the state considers imposition "some taxes of a nature, which would be high, encourages development, and can be dedicated to the development with the particular geographical area."

The senator was quick to point out that his suggestion for land acquisition should not be interpreted as expropriation. He, however, said, it can't be business as usual wherein lands are left idle with not apparent plan for development.

The senator argues that development is often impeded by owners of lands, who are sometimes missing until the state put in place plans for its use.

"Persons live on land, they don't own it, you can't find the owner, but as soon as you start the improvement, a fee simple owner arrives on the scene. If you clear a piece of land, which many in the last 30 years have never seen someone associated with, as you clear it, somebody turns up," Knight.