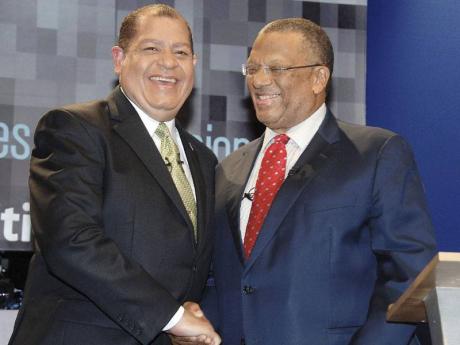 Opposition spokesman on Finance Audley Shaw is warning that Jamaicans may not have heard the last tax package from the Government.

Shaw was speaking at the Jamaica Labour Party (JLP) press conference on Friday. Quoting the Finance Minister's second Budget presentation, Shaw wondered if the International Monetary Fund (IMF) would consider the package to be acceptable.

"By the minister's own admission, 'there are those, including fund staff, who believe that more could be done this year ... whether and to what extent our initial effort can be supplemented is an area for negotiation'. What is that telling us?" asked Shaw. "That is telling us that this could very well be just the first tax package for the year because he's talking about the clear and present possibility for further negotiation with the IMF concerning a supplemental programme for tax. Is it a nomenclature for other tax packages to come?" he asked.

With Jamaica's debt at J$1.6 billion, Shaw said borrowing at cheaper rates and servicing debt on the Budget at lower rates was critical to debt management. But he said the fiscal responsibility policy paper tabled by Dr Phillips, showed by the end of this fiscal year, the minister would have added J$216 billion to the stock of debt, raising it to $1.8 trillion. Using the same paper, Shaw said that by the medium-term programme in 2015, the stock of debt will reach almost $2 trillion.

"This is the man who said in Parliament that he will have a downward trending of the debt," he remarked. "And if he returns to a high interest rate regime which is quite possible...the minister would have found a more expensive way to put the country more and more into debt," he concluded. Holness reiterated the belief that the Government presented a Budget that was not fully thought through and that they would miss their revenue and expenditure targets.

"The Government presented a Budget that showed no imagination, no hope no promise and definitely it will not create any growth." Also citing the fiscal responsibility framework, he said there is an obligation on the finance minister to present credible targets to the nation.

"So as Mr Shaw has said, the Government is likely to return to Parliament very soon, with measures to fill the gap, which is a strategy which does not speak well to their own planning."

"The only thing they have pointed out as favourable, is that the Government has a favourable political climate. Who has created that ... environment? It is certainly not the Government," suggested Holness. "Rather, it is the progressive, positive and realistic stance ... of the Opposition." Holness opined the Opposition had given critical support to areas of national development and said the JLP has spoken out on issues they felt the Government could have done better. He expressed pride that through strident debate, the Government altered some of the initial measures announced.

"And we have not done so in 'nightmare' fashion," a jab at then-Opposition Leader Portia Simpson Miller's remarks at then-Prime Minister Bruce Golding. "We have not done so by riling up street protests ... in such a way as to divide the nation. We have done so in a responsible way and we have created a positive political climate in which the Government now has an opportunity to act." He chided the Government for presenting a tax package under the guise of tax reform.

"What was presented...is inequitable. (It) will only further help to impoverish the country," he said.