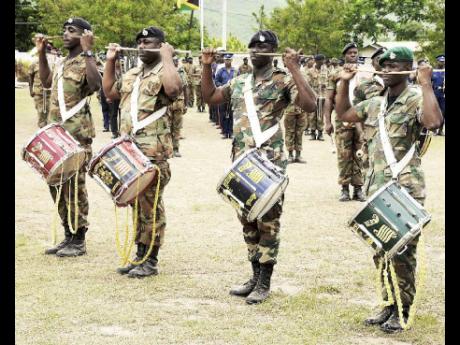 National Commercial Bank (NCB) Jamaica Ltd has come on board as the official banking partner for the Jamaica Defence Force's (JDF) Military Tattoo 2012. The financial group has pledged $7.5M in support for the world-class military extravaganza, scheduled to unfold over four days from June 28 to July 1. The event is one of the top Jamaica 50 projects which will feature over 800 local and overseas military and civilian performers who will carry out dynamic and exquisitely executed stunts for the enjoyment of an anticipated audience of 9000. The event will also depict the chronological growth and development of the JDF from 1962 to present while projecting its future relevance.

"The military has distinguished itself as a source of pride, discipline and respect for all Jamaicans and NCB is indeed pleased to partner with the JDF on this important national initiative as we believe it will serve as an educational, historical and inspirational experience for the thousands of patrons expected," said Patrick Hylton NCB's group managing director. "Supporting this initiative also forms part of NCB's 175th anniversary celebrations which are focused on showing appreciation to Jamaicans for the patronage over the years," added Hylton.

In addition, as the official banking partner, patrons and merchants at the upcoming Tattoo will have the benefit of using NCB point of sale machines to conduct most of their transactions (for food purchases and other services) thereby reducing the need to carry cash. "The NCB and JDF teams are in the final stages of the mammoth groundwork involved in preparing for the elaborate staging of the Military Tattoo and we know Jamaicans will have a once in a lifetime experience come June 28," said Belinda Williams NCB's group corporate communications manager.

Meanwhile event director Lt. Colonel Jaime Ogilvie said the JDF is extremely grateful for NCB's support. "As we celebrate 50 years of steadfast service to a nation on a mission we view the partnership with NCB as a natural fit as they have proven to be an institution with a strong legacy of nation building," said Ogilvie.

The term 'tattoo' is derived from the Dutch phrase "doe den tap toe" - turn off the taps, which was communicated by drum beat (and later by bugle call) and warned innkeepers to turn off the beer taps and soldiers to return to their quarters for the night. Today it has evolved into an elaborate display of marching bands, precision drill movements and dynamic military displays, as well as performances by other organisations and agencies. There have been four Tattoos in Jamaica's recent history: 1933, 1953 (Coronation Tattoo), 1968 and 1983.

The theme for the 2012 event is "The First Five Decades: Precision, Pomp and Pageantry" and will be held at the Polo Field in Up Park Camp.