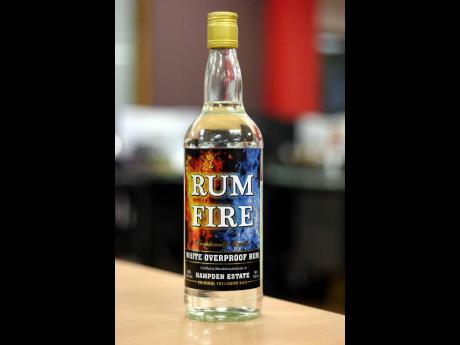 As part of its gesture to celebrate Jamaica's 50th Independence activities; Everglades Farm Limited says it will maintain pre-budget prices for its Rum Fire white overproof rum throughout the summer.

"We are aware that it will have big financial implications for us, as we'll be absorbing the cost the consumer is foregoing, but it gives us an opportunity to gain market share and give something back to Jamaica for this exciting summer of Olympics and the Jamaica 50 celebrations," explained Christelle Harris, Rum Fire's marketing director.

Finance Minister Dr Peter Phillips announced an increase in taxes for white overproof rum(effective June 1) during his raft of measures to raise revenue in his 2012/2013 estimates of expenditure.

According to Harris, the tax proposal calculates the tax by the formula of $960 per litre of absolute alcohol, which results in a $454 tax on a quart of rum; or a $5,444 on a case.

"Taxes are a part of life, but this drastic measure on a commodity that is so loved by Jamaicans, we knew was going to be hard to stomach ... particularly party-goers this summer."

Rum Fire, which was introduced to the market a year ago, is bottled at the Hampden distillery in Trelawny. Hampden and Long Pond Sugar Factory are operated by Everglades Farms.

Rum Fire is distributed islandwide by Red Stripe Jamaica and Hampden Distributors. It has copped a silver medal in the 2011 Ministry of Rum Tasting Competition in San Francisco and the 2012 RumXP silver award in April from the international rum expert panel at the Rum Renaissance Festival in Miami.