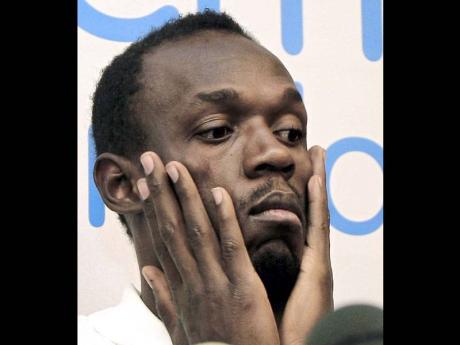 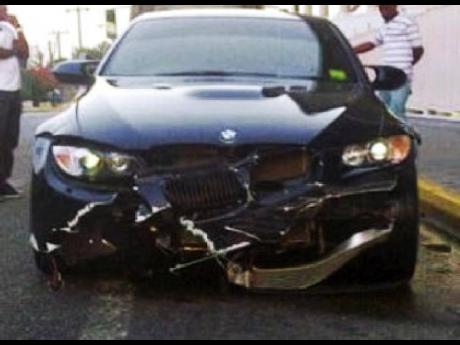 Usain Bolt's BMW motor car that was involved in an accident on South Odeon Avenue on yesterday Morning. - Contributed
1
2

Reigning triple Olympic champion and world-record holder, Usain Bolt, walked away unharmed after being involved in an accident early yesterday morning in the vicinity of the Half-Way Tree Transport Centre.

Bolt's publicist, Carole Beckford, confirmed that the World Champ-ionships 200m champion was in fact involved in a "minor" accident at 5:15 a.m. on Sunday morning, but that he was unharmed; welcome news to the sprinter's legion of fans across the globe.

The 25-year-old sprinting superstar was said to be returning from a popular party when he lost control of his black BMW motor car and subsequently swerved into guard rails.

"He is OK," Beckford said. "We are classifying it as a minor accident; he drove home (in) the car after (the accident)."

"Usain has training, he has national trials in a few weeks, and so he will go under observation and deal with physiotherapy," Beckford further highlighted.

Asafa Powell, one of the men who Bolt will do battle with on June 29 - the second day of the trials, in one of the most anticipated races of the year - the men's 100m, was also on the scene of the accident, as he was travelling in another vehicle.

"My friend and countryman (Bolt) is OK after a fender bender," Powell wrote on his Twitter account Sunday morning.

Powell also dispelled rumours that he was hurt: "Contrary to the news, I was in another car."

According to the Constabulary Communication Network no reports were made regarding the accident.

"When police arrived on the scene all they saw was an oil spill, so the car was taken away we don't have anything at all. We can't say that it did take place, but passers-by did confirm the incident. But no reports were made; no one came in at any police station and made any report."

Bolt was involved in an accident three years ago when his BMW M3 overturned in a ditch on Highway 2000. He suffered minor foot injuries then after stepping on thorns. He, however, recovered and four months later set world records in the 100m and 200m with times of 9.58 seconds and 19.19 seconds respectively at the IAAF World Championships in Berlin.