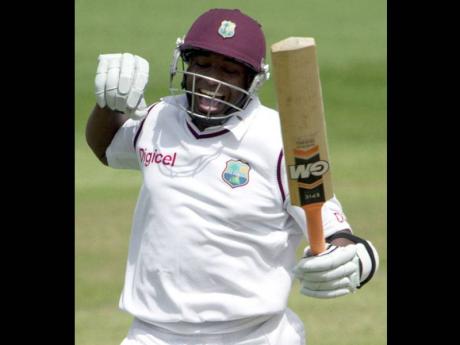 West Indies' Tino Best celebrates after he reaches his 50 during the fourth day of the third Test match against England at Edgbaston cricket ground, Birmingham, yesterday. Best made 95 runs. - AP

Charismatic Tino Best astonishingly struck the highest score by a number 11 in Test history while Denesh Ramdin stroked his second Test century before embroiling himself in controversy, as West Indies dominated the fourth day of the final Test in England yesterday.

The right-handed Best, playing his first Test in three years, smashed an entertaining 95 before falling agonisingly short of three figures to help propel West Indies to 426 all out at Edgbaston.

Ramdin, starting the day on 60, stroked an unbeaten 107 but spoiled a fine innings when he celebrated his landmark by producing a piece of paper with the words "Yeah Viv Talk Nah" scribbled, and pointing it towards the media centre.

The right-hander, recalled for this series after a spell on the sidelines owing to poor form, faced 183 balls in four hours and 50 minutes at the crease, and struck nine fours.

Ironically, his last century also came against England in Bridgetown three years ago.

Best, meanwhile, entertained the small crowd with a cameo, smashing 14 fours and a six off just 112 balls, to surpass the previous best by a number 11 - Zaheer Khan's 75 for India against Bangladesh eight years ago.

His previous highest score was 27 against Sri Lanka in Kandy seven years ago.

Ramdin and Best added 143, the highest last-wicket stand for West Indies against England and the third highest in Test history.

England then slumped to 49 for three before recovering to reach 221 for five at the close, thanks to a 137-run, fourth wicket stand between Kevin Pietersen who top-scored with a frenetic 78 off 81 balls and the stylish Ian Bell, who finished the day unbeaten on 76.

Best was once again in the thick of things, bowling with pace and hostility to lead the Windies attack with two for 37.

England's fightback also virtually ruled out any possibility of a result in the contest, after the first two days were abandoned because of rain.

Resuming the day on 280 for eight, West Indies lost Ravi Rampaul to the third ball of the morning, caught behind off lanky pacer Steven Finn (3-109) without adding to his overnight two at 283 for nine, paving the way for the fireworks that followed.

Best started quietly before coming to life with a pair of thumping cover-driven boundaries off Finn in the day's third over before smashing seamer Graham Onions (4-88) through mid-off in the next over for his third four.